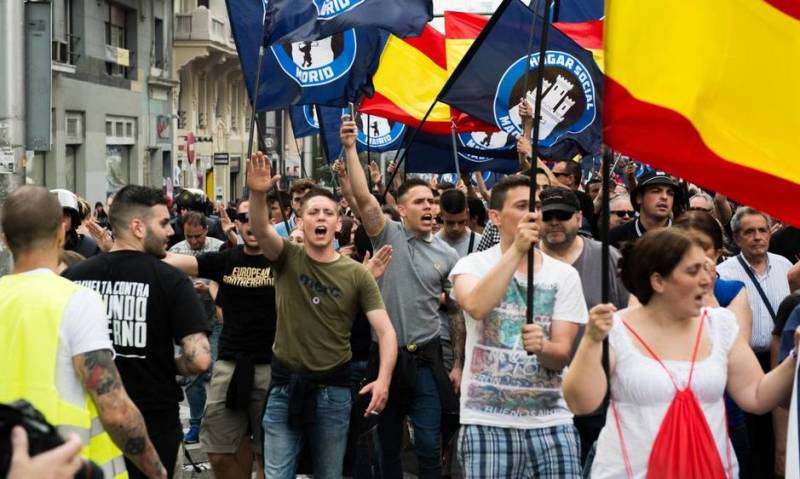 Hogar Social Madrid have been evicted from a government owned building in Madrid, Spain. Credit: HSM.

THE National Police has issued a statement this morning (January 9) to announce that the first step has been made to rid the capital of the increasing number of ‘Neo-Nazis’.

According to sources close to the Superior Police Headquarters, a large-scale operation backed by the Spanish government has been carried out today to dismantle ‘Hogar Social Madrid’ (HSM), a group characterised by a proportion of people in Spain by their racist and hateful actions against ethnic minorities.

The group, made of of 26 individuals, had squatted in the government owned former headquarters of Comisiones Obrerases (CCOO), a Spanish trade union for workers, since November of 2018 – the ninth building occupied by the group since 2014. Here, they converged to organise their demonstrations, in addition to providing food and shelter to homeless people, on the condition that they were ‘white and Spanish’.

The former CCOO headquarters in Madrid was certainly expansive, spread across 8 floors with a total area of 7,000 square meters. Concerted efforts had been made by the government and National Police to evict these individuals from the building located on Plaza de Cristino Martos, however each attempt proved unsuccessful.

The occupation of the building was denounced by the Ministry of Labour, Migration and Social Security in November 2018 “in order to recover possession of the building,” which was met by complications in the judicial court.

However, eviction was granted earlier this month and in the early hours of this morning, police carried out a dawn raid, forcing entry into the building and subsequently removing all individuals who were inside. They also took down the controversial HSM flag which had been flown outside the building since their arrival.

HSM has since condemned the eviction, stating that it has resulted in “30 people being without a home.” By mid-morning, several of those who had lived inside the building, hovered on the streets claiming that they did not know where to go.

The ‘Neo-Nazi’ group is renowned for spreading racial hate across Spain, where the ultra-right wing group have a particular distaste towards immigrants, Muslims and ethnic minorities. As well as holding demonstrations and distributing propaganda, the group have been behind several attacks on minorities, including torching a mosque in Grenada. Led by Melissa Rodríguez, they commonly back the actions of Adolf Hitler and are said to use slogans associated with the Nazis.