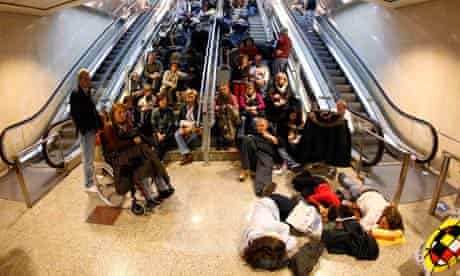 2010: Eight Spanish airports, including Madrid, closed across the Spanish mainland and flights from the Canary Islands, as well as Portugal and Morocco, were cancelled.

A State of emergency was declared after walkout by air traffic controllers grounded flights for 330,000 people. Airlines cancelled flights in and out of the country after industrial action affecting 330,000 international passengers. The Spanish government declared a state of emergency and threatened the strikers with imprisonment.

Alfredo Perez Rubalcaba (Deputy Prime Minister of Spain from 2010 to 2011), said the controllers – who called in sick en masse – had been ordered back to work and could face charges and jail under the military penal code if they refused.

Airlines including Iberia, EasyJet and Ryanair cancelled all Spanish flights. The country’s airspace had been taken over by Spain’s military in an attempt to get flights moving during a holiday long weekend in Spain. Spanish soldiers were not trained on how to use civilian airport equipment but instead were in place to give orders to controllers who did report for work.

What was the strike over?

Jose Blanco, the then Minister of Public Works, decided to introduce what was called the ‘December Rule’ which basically meant workers often exceeded what was thought were safe working hours over the Christmas period.

Air Traffic Controllers, the airport authority AENA and the Spanish government could not agree on the maximum hours the workers should be allowed to do and so the strike went ahead.

A state of national alarm followed for 43 days which left countless passengers stranded with a total of 1,352 flights being cancelled, it was a big deal…

The first trial began in Palma, Mallorca,  followed by Madrid and an unprecedented 133 workers will be sitting before the judges. The charges against them are ‘abandoning public service’ and causing financial damage to the passengers that were involved.

By accepting responsibility for their actions, 126 of the 133 workers involved in the strike struck a deal with the prosecutor’s office and have agreed to pay €1,000 for each of the 15,190 that made an official complaint, with an extra €150 for the expenses they incurred.

As the trials play out it is fully expected the total claims will be around €17 million, but that figure could change.