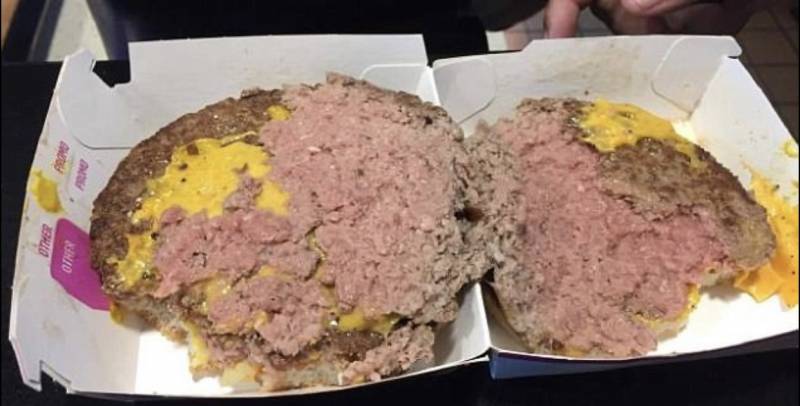 Michelangelo Thompson was left disgusted when he bit into his Big Tasty burger from McDonald’s and found it was ‘completely raw’ and ‘bloody’. Thompson who is an ex-McDonald’s worker and his partner visited the Brighton branch on Saturday night and took their food home to eat. His stomach was left churning when he bit into the burger to find it was and was ‘mushy’ and was shocked to discover that the burger was completely undercooked. Luckily Mr Thompson suffered no food poisoning, however it could have been dangerous for him as he suffered an illness as a child that left him with no lymph nodes in his neck, and has weakened his immune system.

McDonald’s have issued a statement saying that they apologise for the incident and that they were ‘disappointed that on this occasion their rigorous standards were not upheld’ but investigations had shown the kitchen equipment not to be faulty. Although McDonald’s have apologised, Mr Thompson has vowed to avoid the McDonalds branch in the future. He said ‘I’m glad that my taste buds work well, because it was when I tasted it that I realised that it wasn’t like a normal burger. I eat a lot of McDonald’s. I’m no stranger to being a customer to them, but I’ve also never experienced a burger like this.’

The order we did was a happy meal with a plain burger, the cheesy bites that they do, and a large Big Tasty meal. We’d ordered it all and live just around the corner, so we took it home to eat. I ate the cheese bites and everything was fine, but we were talking about how the chips were a bit anaemic and not warm. I took a bite of the burger and tasted the Big Tasty sauce that they use. But it was really mushy, so I wondered why. Had the tomato been crushed?

But I looked in and I realised it was red and pink and had blood.

I had stomach aches after eating the first burger but I think that’s because it was how I thought it was making me feel.’

Mr Thomson returned to the McDonald’s the next day and was refunded the £5.50 for the Big Tasty meal but was left frustrated that it wasn’t investigated properly. As an ex-employee he believes the grill was either broken or the person on the grill didn’t do the food testing correctly.

A McDonald’s spokesperson said: “Food safety is of the utmost importance to us and we place great emphasis on quality control. The restaurant team took the product for testing, and have subsequently investigated to ensure there was no fault with the kitchen equipment that could have caused issues in the kitchen. Our customer services team are also in conversation with the customer, and are in the process of finding a satisfactory solution.’