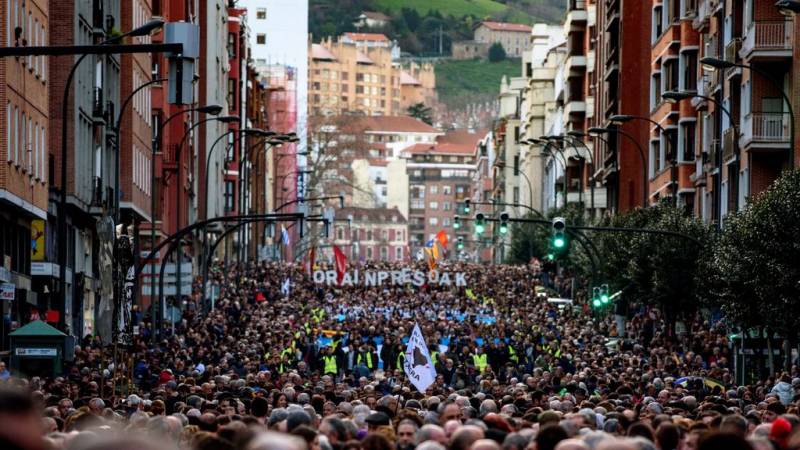 SOME 65,000 people converged on the streets of Spain’s Bilbao today (January 11) to demand the return of jailed members of the ETA Separatist Group.

Equipped with banners and shouting slogans in union, the tens of thousands of protesters urged that prisoners who are being held away from Spain’s Basque Country to be transferred to jails that are closer to their families.

The ETA, which stands for ‘Euskadi Ta Askatasuna’ or ‘Basque homeland and freedom’ was established in 1959 during the Franco era by a group who desired to gain independence from Spain and to establish an independent state in the northern part of the country.

However, the separatist group have been blamed for the deaths of 850 people during a 40-year period that reigned horror on the country in a campaign marred with bombings and shootings.

Under a policy rolled out by the Spanish Government, the prisoners were strictly kept in jails hundreds of miles away from the region, where their families have expressed that the distance has proved especially difficult for regular visits. They also state that some of the prisoners are extremely sick and should be released immediately.

As Euro Weekly News understands, at present, very few prisoners are being held in jails situated in the Basque Country as approximately 200 others were sent outside of the region, including in Cadiz, which lies some 1,000 km away.

Speaking on behalf of all those who converged in solidarity, spokesman Joseba Azkarraga asked Pedro Sanchez’s new government to “take into account the thousands of people who want peace” and to “end the violation of prisoners’ rights.” Mr Azkarraga urged Councillors in the region to take action as the “majority of people in the Basque region support the prisoners” adding “their children should not have to travel hundreds of kilometres away for a 40-minute visit.”

Pedro Sanchez had pledged to reverse the governmental policy when he was elected as acting Prime Minister of Spain in 2018, however not much progress has been made to change the prisoners’ situation. Storming to victory this week, the thousands of people urged the PM and his new coalition government to imminently act on the issue.