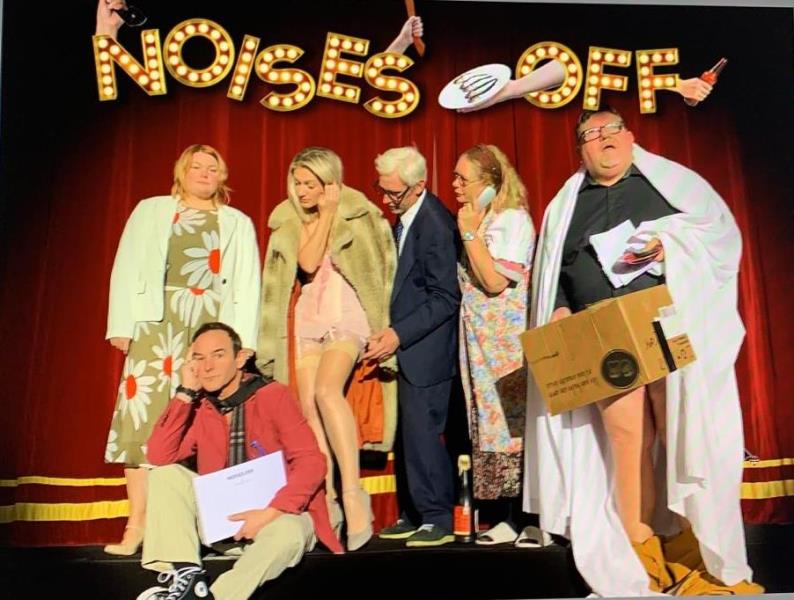 NOISES OFF was written by English playwright Michael Frayn in 1982 and is widely heralded as the funniest play ever written for theatre which is why it was chosen to be performed at Salon Varietes Fuengirola from January 21 to 26.

The idea came when Frayn was watching from the wings a performance of The Two of Us, a farce that he had written for Lynn Redgrave and he later said, “It was funnier from behind than in front and I thought that one day I must write a farce from behind.”

This hilarious comedy play is a behind-the-scenes look at a chaotic stage production populated with frenetic and unstable actors, a volatile director, and an overworked and overly emotional stage crew!

Act One is set at the technical rehearsal at the (fictional) Grand Theatre in Weston-super-Mare; It is midnight, the night before the first performance and the cast are hopelessly unready.

Act Two shows a Wednesday matinée performance one month later, this time at the (also fictional) Theatre Royal in Ashton-under-Lyne. In this act, the play is seen from backstage, providing a view that emphasises the deteriorating relationships between the cast.

In Act Three, you see a performance near the end of the ten-week run, at the (again fictional) Municipal Theatre in Stockton-on-Tees. Relationships between the cast have soured considerably, the set is breaking down and props are winding up in the wrong hands, on the floor and in the way.

Chaos reigns but the actors do their best to keep things moving and the audience is guaranteed a great night out.

To book, visit the website www.salonvarietestheatre.com, telephone the box office on 952 474 542 between 11am and 2.30pm Monday to Friday or arrive one hour before the show to make sure of your ticket.