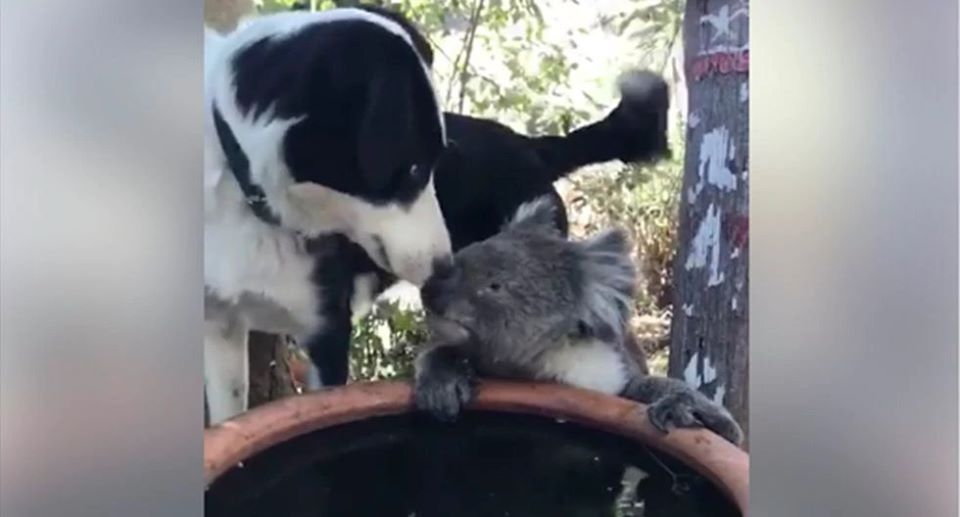 AT LEAST 180 fires continued to burn across Victoria and New South Wales (NSW) states, with about 20 yet to be contained in NSW, Australia’s most populous state. In Victoria five fires were at the ‘Watch and Act’ advice warning, one level below emergency status, authorities said.

Melbourne, Australia’s second-largest city, and the capital of the south-eastern state of Victoria was shrouded in hazardous smoke from the country’s raging bushfires on Tuesday, and the start of qualifying matches for the Australian Open were delayed by 90 minutes and practice suspended after air quality deteriorated to “hazardous” levels.

More than one billion animals have been killed this bushfire season as blazes devour Australia, so it has been endering to watch, amidst the heartbreak, the touching moment a family dog named Rusty and Quasi the thirsty koala share water and rub their noses together during drought crisis.

The touching moment a family’s dog shares its drinking water with a thirsty koala amid the bushfire and drought crisis has been caught on camera.

The incident took place in a family home in Ashton, in Adelaide Hills, South Australia. The koala, on hot days, had taken to seeking refuge in one of the trees in the backyard of the Stone’s house.

The Stone family, who have named the koala Quasi, then observed how one day Quasi wandered up to their pet dog’s water bowl to have a drink.

Footage captured by Danielle Stone shows Rusty, the family dog, happily greeting his furry friend at his drinking bowl to share a drink before the pair affectionately nuzzle noses.

Ms Stone, in an interview with 7News said that the dog didn’t mind sharing the water bowl at all and always displayes excitement when Quasi visits.

‘I think humans could learn a thing or two from this pair.’  She said.

The video was uploaded to Facebook by a family friend just recently and has gone viral since, with more than 150,000 shares and offers “some relief from the heartache” as Ms Stone added.