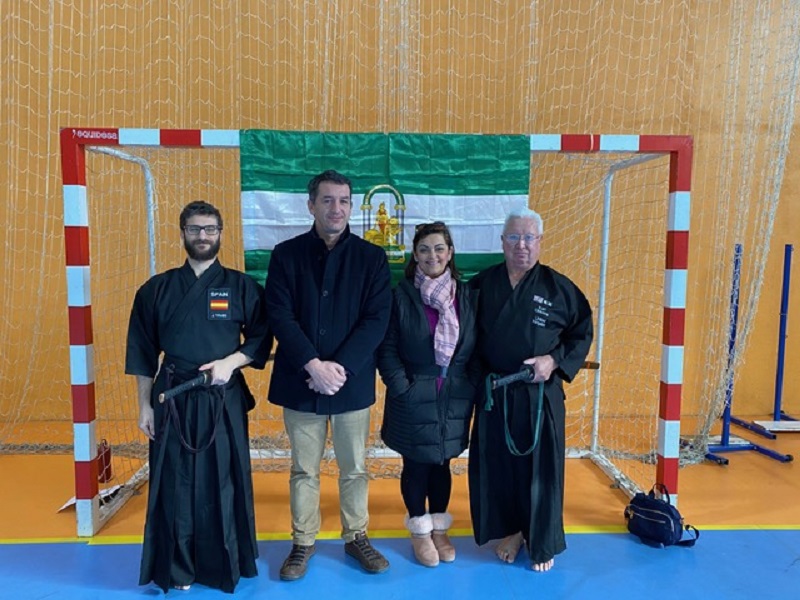 MOJACAR council has given its full support to the Andalucian Iaido martial arts team, which last weekend staged a training session in the municipal sports centre in preparation for the Spanish championships in April.
Laido is a Japanese martial art involving the ability to quickly unsheathe and sheathe the Japanese katana curved sword, a skill once practiced by samurai. These techniques enable attack and defence at the same time, with a speed that aims to leave their opponent with no time to react.
In all 20 Kenshi swords people from the Andalucian team, including members of the national Iaido squad, came together in Mojacar under the organization of Javier Tirado, a European and Spanish champion and the Andalucian manager.
Also overseeing the training session was collaborator, Karl Gibbons, a 5th Dan with international experience as a former UK team manager and coach to European and UK gold medallists, as well as collaborator and event organiser, who now spends much of his time in Mojacar.
The local councillors for Tourism and Sports, Emmanuel Agüero and Ana Garcia, acted as hosts on the day and were keen to discuss with Javier and Karl future training in Mojacar, as well as support for the Andalucian team, especially as a good number of the members are from Almeria.
There is also all-round support for the idea of creating a specialist laido training centre and school in the area for all nationalities.
Karl took the opportunity to announce that next winter several British Iaido squads are set to come to Mojacar for their winter training, among whom will be several 7th Dan masters.
Mojacar council said it is actively promoting a whole range of national and international sports activities through its Tourism and Sports departments. The local authority maintains the municipality is an ideal training ground and developing the area’s appeal to sportspeople helps boost visitor numbers in low season,
Both Javier and Karl expressed their gratitude for the local authority’s interest in and support for the regional team, which is very important at national level.
The Iaido discipline is included in the Spanish Federation of Judo and Associated Sports. The Spanish National Iaido team, despite its relative youth, has some outstanding swords people who have already had great success on the international scene.