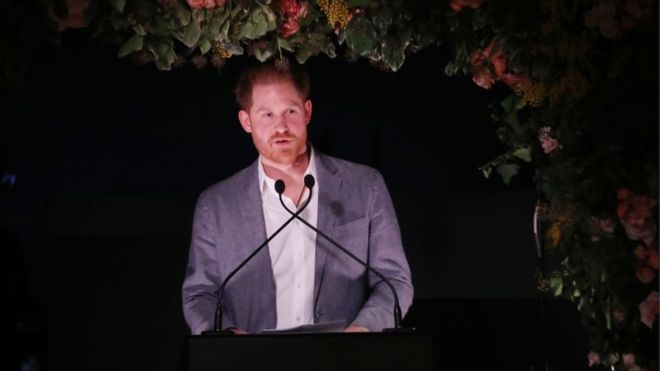 Prince Harry made an emotional Speech last night at a charity dinner.

The Duke of Sussex was at a formal private dinner in Chelsea, for vulnerable children’s charity Sentebale, which he founded in 2006.

Prince Harry: “When I lost my mum 23 years ago, you took me under your wing. “You’ve looked out for me for so long, but the media is a powerful force, and my hope is one day our collective support for each other can be more powerful because this is so much bigger than just us.”

The reference to Princess Diana comes after comments Prince Harry made late last year when defending Meghan Markle from “malicious” and “relentless” coverage of his wife in an open letter on the Sussex’s official website.

He said: ”Unfortunately, my wife has become one of the latest victims of a British tabloid press that wages campaigns against individuals with no thought to the consequences.

“A ruthless campaign that has escalated over the past year, throughout her pregnancy and while raising our newborn son.”

“My deepest fear is history repeating itself,” he wrote. “I’ve seen what happens when someone I love is commoditised to the point that they are no longer treated or seen as a real person. I lost my mother and now I watch my wife falling victim to the same powerful forces.”

“We are taking a leap of faith – thank you for giving me the courage to take this next step.”

The upset of how Meghan has been ‘treated’ by the media, is what was said to have caused the Sussex’s to step down as senior royals.

In a statement released by the Queen, she announced that Megxit plans are finalised and that the Sussexes would now live an “independent life.”

“Following many months of conversations and more recent discussions, I am pleased that together we have found a constructive and supportive way forward for my grandson and his family.

“I recognise the challenges they have experienced as a result of intense scrutiny over the last two years and support their wish for a more independent life.