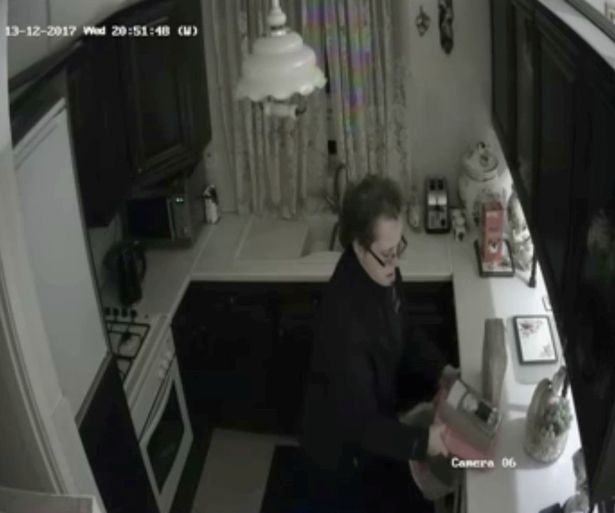 Caught on Camera: Care worker rifles through the woman's purse.

Caroline Bastable, the carer, 42, was supposed to look after Sheila but instead she was blatantly stealing from her. As Sheila Wade, 82, slept on a sofa less than a metre away, Caroline was filmed pocketing precious jewellery from her fireplace.

Sheila’s son John Wade, 59, set up a network of secret cameras after noticing food and money was going missing from her home. After recording for just two weeks, John had captured evidence of Bastable stealing gift boxes of perfume and toiletries from Sheila’s bedroom cupboards, as well as food from her kitchen.

A camera set up outside the house showed the carer taking the goods to her car and driving away without a second glance. In total, John said Bastable got away with around £8,000 worth of his mother’s belongings, even stealing cigarettes.

John said his only comfort was that Sheila, who suffers with breathing problems as well as vascular dementia, was ‘completely unaware’, adding: ‘Otherwise it would have really upset her.’ He said: ‘I started noticing money that I’d given mum for shopping was missing, and then food was going, and cigarettes. ‘The real red flag was when I dropped off three pints of milk at her house before I went on holiday, and the neighbour contacted me two days later to say they’d disappeared.

‘I installed home security cameras and watching the footage back, you could clearly see mum’s carer pocketing cash, jewellery, and perfume as mum slept on the couch. ‘I felt so angry watching this woman raiding mum’s drawers and cupboards for gift sets of toiletries, stealing her Swarovski jewellery and Cartier watches.’ Sheila’s family claim the incidents began in November 2017, when food and milk began to disappear from her home. A family friend then noticed cash, which had been hidden around the house, was also missing.

Police investigating the case watched 12 days of CCTV footage on discs containing 8,000 video files to collect evidence of theft and uncovered signs of neglect. They arrested Bastable on December 17, 2017, and a raid on her home found stolen cash, cigarettes, jewellery, and toiletries belonging to Sheila. Bastable has pleaded guilty to wilful neglect and two counts of theft and will be sentenced on February 28.