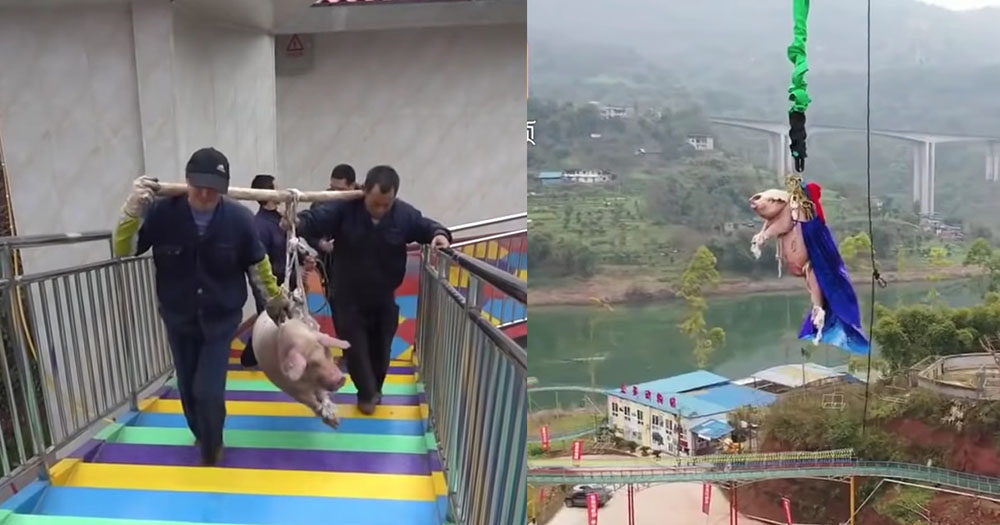 Heavy criticism has landed on a Chinese theme park, after they forced a live pig to bungee jump in order to promote their new ride.

The animal had its legs tied together with rope, as it was lifted to a 223ft tower, at the Meixin Red Wine Town theme park in Chongqing, Southwest China on Saturday. It was simply connected to the bungee and thrown from the tower. The pig could be heard in a video to be screaming heavily as it plunged, eventually coming to a silence as the cord became still. A crowd could also be heard to be laughing and cheering at the cruel event.

The theme park has since reacted, attempting to defend the event by revealing that the pig was later taken to the slaughterhouse.

A cameraman working for the theme park told state news website Global Times, “A pig bungee jumping is odd and attracts tourists and local residents to our site.”

“Pigs experience pain and fear in the same ways that we do, and this disgusting PR stunt should be illegal,” Jason Baker, Peta senior vice-president of international campaigns, told BBC News.

“The Chinese public’s angry response should be a wake-up call to China’s policy-makers to implement animal protection laws immediately.”

Outrage was also seen on the Chinese version of Twitter – Weibo. One user posted “It was miserable for the animal! It’s a disgusting marketing idea to attract attention by abusing a pig!”

Another user noted, “Killing animals for consumption and treating them cruelly for entertainment are two different things. There is no need to torture them like this.”

The park’s publicity department have apologised and said it was an “ill-conceived activity” staged “to pray for pork prices to take a dive.” China are currently the largest consumer of pork in the world. There have been dramatic shortages in recent times, inevitably causing prices to skyrocket. An outbreak of African Swine fever swooped the nations pigs last year, with reports suggesting that hundreds of millions of pigs were lost.

For some bizarre reason, there is no punishment for animal cruelty under Chinese law. This most likely helps fuel its controversial dog meat festivals. However, there has been growing awareness of animal welfare issues in recent years.