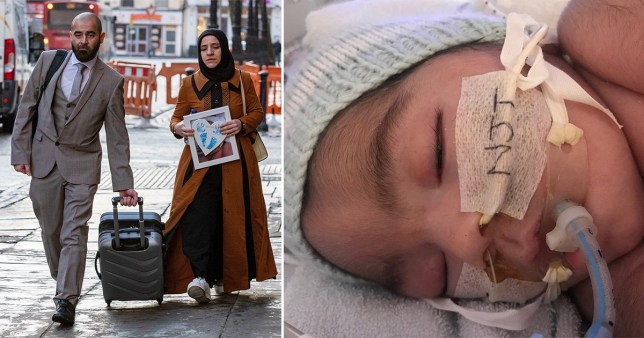 A Judge has refused a bid to adjourn a High Court trial over whether life support treatment for a brain-damaged baby should continue.

Midrar Ali’s father Karwan, 35, and mother Shokhan, 28, want specialists at St Mary’s Hospital in Manchester to keep their four-month-old son on ventilation. They told a close source, “He is showing signs of life, is growing and should be given more time.”

Complications during birth led to Midrar being starved of oxygen and suffering brain damage. Specialists at Saint Mary’s Hospital in Manchester say Midrar is dead and have told a judge that just keeping his body connected to a ventilator is not dignified and want the treatment to be withdrawn.

Lawyers for the Alis argue that the youngster’s heart is ‘still beating strong’ and further medical evidence needed to be fully explored before the machine should be switched off. Bruno Quintavalle, representing the family from Manchester, also told the hearing at Preston Family Court that Midrar was circumcised last week and he had ‘reacted in a way the parents had never seen before’.

He said: “The baby perspired profusely … he was said to be sweating a lot in the face, there was redness over the lower face and neck, and more importantly he opened his eyes. The first time Mr Ali had ever seen that and he kept them open for all day after.”

Neil Davy, for Manchester University NHS Foundation Trust, said medics present at the childs recent circumcision accepted there was some sweating and redness but said its evidence would be it was a ‘sympathetic response’.

He explained: “That is a reaction of nerves in that area to what is happening, not triggered by something in the brain. Crucially it does not involve a signal passing through the brain stem.”

Mr Davy added it would be argued the eyes opening could also be attributed to nerve reaction. The barrister submitted there should be no further delay to proceedings as Midrar’s organs, in particular his brain, were beginning to deteriorate and there was evidence of necrosis.

There may come a time when ‘much more aggressive intervention’ may be needed which would be ‘deeply distressing’, he added. Refusing the adjournment application, Mrs Justice Lieven said she did not accept the matter is not urgent. She said: “I don’t think it can be right when you have a tiny baby in this situation that it is not urgent.

“The sad truth is that the parents wish for ventilation to be continued under any circumstances. That position is perfectly understandable.”

The court has begun to hear medical evidence which will continue on Tuesday.