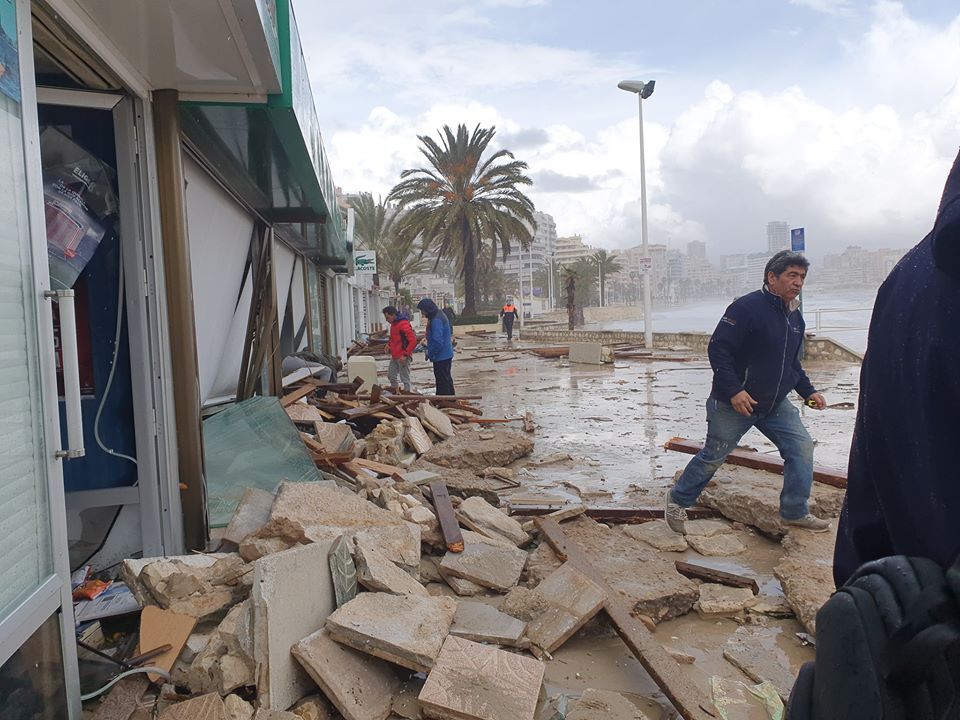 STORM GLORIA unleashed torrential rain, flooding and gales along the Costa Blanca coast and brought blizzards inland last Monday. Local authorities were prepared for the storm, closing schools in 194 Valencia region municipalities and warning the public to travel only if strictly necessary.
Some journeys were impossible with roads either flooded or unpassable because of heavy snowfalls in the Jijona, Alcoy and Vinalopo areas, with Villena temporarily isolated. In response, the regional government mobilised 39 snowploughs and prepared to treat mountain roads with 499 tons of salt and 105,000 litres of brine. Instead of reopening as planned last Monday, airports authority AENA announced that fire-damaged Alicante Airport, closed on Sunday owing to heavy rain, would remain inoperative throughout the day, affecting 190 flights.
At one point 20,000 Alicante province homes were without electricity as trees brought down powerlines. Villajoyosa hospital had to suspend operations for some hours and parts of the hospital were without heating after a pylon was blown down in Jijona, but even after the supply was gradually restored, some outpatients were sent home. Although accustomed to extreme weather and despite all their preparations, the authorities were often powerless to counter the worst that Storm Gloria could bring.
The Marina Alta was badly hit and Javea seafront was underwater from Duanes to the Arenal with devastating effects on promenades, business premises and homes. The River Gorgos broke its banks in Jalon and Gata as well as Javea, where residents were evacuated from nearby homes and campsites. Residents also had to be evacuated in Denia where parts of town and the port area were flooded. Frontline villas on the always-vulnerable Les Deveses beach suffered significant damage and the sea invaded the mouth of the River Molinell between Denia and Oliva.
In Calpe, residents were warned to avoid the seafront and the promenades where shops and restaurants had been wrecked by the pounding sea. Neighbouring Benissa’s stretch of coastline was badly affected and boats at the Les Bassetes yacht club were literally lifted by the wind as far as the carpark. Moraira, less exposed to the mountainous seas, still suffered considerable damage to its promenade, seafront zones and street furniture as well as fallen trees. Towns on the other side of Mascarat in the Marina Baja did not escape Storm Gloria’s attentions although devastation was not on the same scale.
Seawater entered some Altea garages on the seafront and the level of the River Algar rose dramatically owing to the torrential rain and released water from the Guadalest reservoir upstream. Alfaz’s Technical Services department, Proteccion Civil and police had been working since dawn, but by mid-morning, the town and Albir seafront had returned to normal. Work consisted mainly of shifting fallen trees and removing debris and driftwood from Albir’s seafront, the town hall said.
Benidorm town hall reported 33 incidents, but none were serious although several cars were damaged by fallen trees. Schools functioned normally and although streams and watercourses were swollen, the town’s storm drain system “responded perfectly” to the heavy rain, with only minor flooding that was solved without problems, the town hall said. Apart from the power cut at the hospital, Villajoyosa was also let off comparatively lightly by Storm Gloria with fallen trees, power cuts, damaged street signs and placards and slight flooding in some streets. In Gandia, just inside the Valencia boundary, the storm also claimed a life, that of a homeless Romanian woman who habitually slept in a local park and died of hypothermia, municipal sources said.