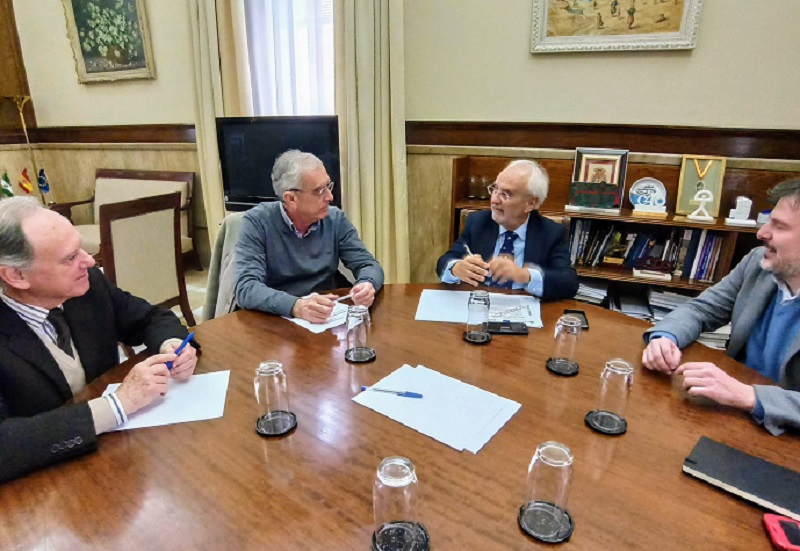 DEMANDS: The business federation president called on the government to act as quickly as possible on the AVE rail line. CREDIT: Subdelegacion del Gobierno en Almeria

THE Almeria-Murcia AVE high-speed rail link was top of the agenda at a meeting between the Sub-delegation of the Government and the ASEMPAL provincial business federation to discuss infrastructure.
The Sub-delegation explained the recent talks were principally about establishing the Almeria business community’s main demands and to assess the current situation of infrastructure projects in the province.
Sub-delegate Manuel del la Fuente told ASEMPAL president Jose Cano Garcia the Transport, Mobility and Urban Agenda Ministry (formerly the Public Works Ministry), had since June put out to tender new sections of the high-speed rail link adding up to €1,200 million, demonstrating the “indisputable commitment” of the national government to the so-called ‘Mediterranean Corridor’.
Cano Garcia meanwhile called on the government to act as quickly as possible on the AVE in Almeria, expressing the concerns of members of the business community about the procedural delays on sections where works have yet to get underway.
He requested a meeting with the Transport, Mobility and Urban Agenda Minister to find out first-hand about the forecasts, planning and calendar for strategic infrastructure in the province.
Also discussed at the meeting were several planned highway projects, among them the remodelling of the link road between the A-7 motorway and the A-92 in Viator, the construction of a third lane on the Mediterranean motorway between the Roquetas de Mar and Almeria city link roads and the remodelling of the Copo and Santa Maria link roads where the A-7 goes through El Ejido.
The expected investment in the three projects is more than €65 million.
The ASEMPAL president also underlined the importance of the Villaricos desalination plant, which has been unused since the 2012 floods, and the “necessary” enlargement of the Carboneras plant.
Manuel de la Fuente told him the Ecological Transition Ministry expected to award the contract for the protection and repair of the Villaricos plant “as soon as possible” and to carry out works on the Carboneras plant which would up capacity by 15 per cent from 42 to 48 Hm3.