AND THEY CALLED IT PUPPY LOVE: Pregnant 13-year-old says she ‘fell in love at first sight’ with boy, 10 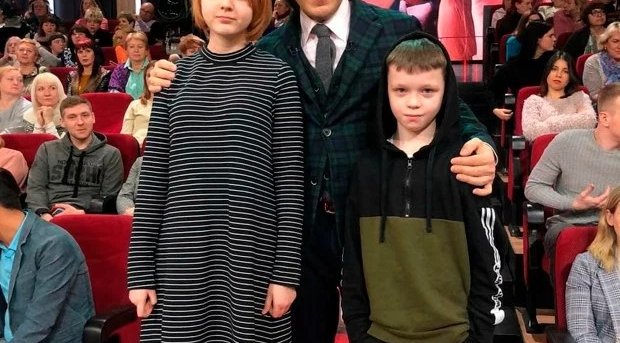 A TEN-YEAR-OLD Russian boy who allegedly made a 13-year-old girl pregnant is too sexually immature to produce sperm, says the doctor who examined him. However the girl has insisted she had no other partner – and she is believed by a psychologist in Russia.

Daria, 13, and Ivan, 10, have even appeared on TV in Russia ahead of their baby’s arrival to share details of their relationship. The television show obtained parental permission and revealed the faces of the children at the centre of a case that has caused deep controversy in Russia.

The boy and his parents agreed to his medical examination with the results revealed to millions of viewers when the children, Ivan and Darya, were out of the studio, a la “Jerry Springer”!

On Air Live show presenter Andrey Malakhov decided to prove 100 percent Ivan was telling the truth so he bought Dr Evgeny Grekov, a urology and andrology expert, to run tests on the 10 year old boy. He told viewers: “We rechecked the laboratory results three times so there cannot be any mistake, there cannot be sperm cells. He is still a child, there is not even any testosterone. And just to add, he still has childish sex organs. ”

He went on to say: “Puberty has not started. So we have a lot of questions.”

The Rossiya 1 channel show – called ‘Father at 10!?’ – also had a neighbour in Zheleznogorsk, a nuclear production city in Siberia which is normally closed to outsiders, who suggested the girl could have had another older partner. The male neighbour in his 40s said: “Obviously, someone else did this. They just want to blame it on the boy.”

But Daria denied this and told viewers: “It was Ivan’s idea [to have sex].

“But I did not mind. He closed the door leaving the key in the lock, so his mum could not open the door. It was scary a bit, that it would be painful. It was just a little – and then everything was normal. It was a bit shameful, we were just hiding under the blanket. I did not think that aged 10 he can do such things… I thought that nothing would happen.”

Psychologist Denis Davydov said when Daria was interrogated on whether she had had anyone else, she gave a “sharp rejection”.

“This gives me the right to say that she had no contacts with other boys or men, she only had Ivan as a partner,” he claimed.

The boy was asked by famous Russian presenter Andrey Malakhov when he realised that “when you kissed Dasha and so on, that it could lead to such consequences?”

He replied: “I did not think about this.”

He was asked if the child could be someone else’s he said: “This cannot be.”

The girl and her mother want to keep the baby but it is too early in the pregnancy for a DNA check on the child, which will be completed later.

Darya’s mother Elena, 35, said: “She confessed that she was with Ivan…and had a good time once. “

“I cannot understand how this could be? Just wake me up, I cannot believe it.”

Off course the question is, if it isn’t Ivan`s child then who is the father? mmm