FATHER AND SON JAILED FOR PEOPLE SMUGGLING: Immigrants paid €1,000 each – were crammed into tiny compartment 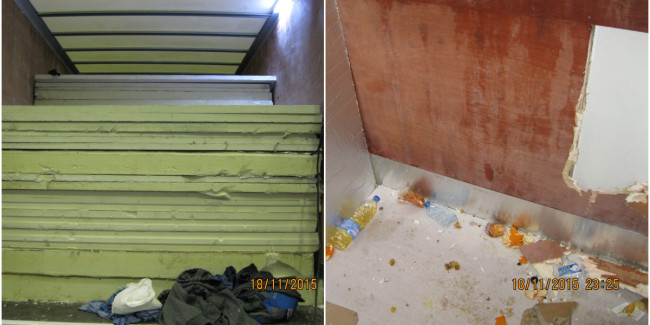 Father and son Sergej and Erick Isaak, 49 and 26, were caught after the rented vehicle went through an X-ray at the Essex port of Harwich, a tiny hidden compartment inside their van was used to smuggle seven Afghan nationals into the UK.

The German nationals were trying to get four men and three women into the country in the 4ft wide gap, hidden behind a cargo of insulation boards. None of the migrants had identification documents when they arrived in the van on a Stena ferry from the Hook of Holland.

The Isaaks, who were paid €1,000 (£840) for the crime, received three years in Jail for people smuggling. They claimed that they were making a legitimate delivery to a firm in Woodbridge, Suffolk, after they advertised their services on Facebook.

Sergej said he had been recruited by a man called Frank to deliver insulation boards and Erick was with him because he had never visited the UK before. Initially there was insufficient evidence to prosecute them and they skipped bail, returning to Germany.

However, Police found that the company they were delivering to had no knowledge of the order so they were extradited back to the UK.

Judge Rupert Overbury said: ‘Terrorists or foreign criminals could thus get into the UK under the radar of our security services and that’s exactly why the sentence for this offence has substantially increased from seven to 14 years.’ Judge Overbury said the illegal immigrants had not been at any particular health risk.

Lucy Sweetland, defending Sergej, said he had hired a van to transport his son’s belongings from Germany to Holland, and had seen an advert looking for someone to transport insulation boards to the UK.

She said he was told there would be a human cargo and he had ‘foolishly and naively’ agreed to take part for a financial reward of €1,000.

Sam Thomas, defending Erick, said he was aged only 22 at the time of the offence and had trained as a nurse before his extradition. He said Erick accepted he had acted ‘irresponsibly and unforgivably’ and had expressed remorse.