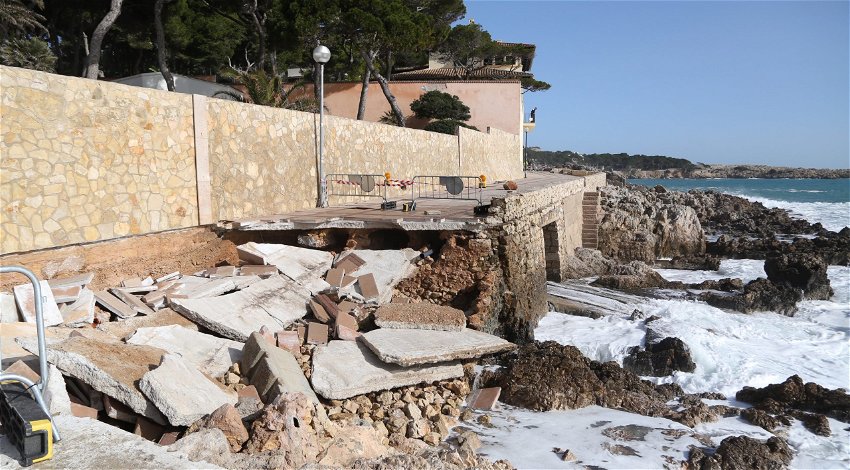 The promenade of Cala Gat in Cala Rajada has been completely destroyed by the storm. Credit: Govern Illes Balears

IT is estimated that damage caused by Storm Gloria to the Llevant coast in Mallorca will reach into the millions.
The adverse weather conditions, which have been described by the Spanish Government as worst seen in the history of Spain, has devastated the coast that runs from Cala Rajada in Capdepera to Cala Llombards in Santanyí. Not only did homes suffer considerable damage, but its promenade, boats, beach bars and restaurants have been destroyed.
The promenade in Cala Rajada and Son Moll is now impassable and will remain closed due to the danger posed to residents. Rafel Fernández, the Mayor of Capdepera said that “we do not have the official analysis of the damage but we can be sure that it will cost between €2 to €3million to repair all that has been damaged.”


Other beaches that have been damaged include Cala Millor, Son Servera, Cala Marçal and s’Illot – with the latter seeing considerable devastation tp homes and poblic spaces, as well as the beach completely disappearing. In Cala Figuera, five boats sank and in Pollença, sailboats have been left stranded on the coast.
Also damaged in recreational boats were the most important consequences of the stormy passage through the north of the Island. In Pollença, yesterday was a work day to remove the sailboats stranded on the coast. It is the case that many of the affected ships were anchored illegally.
Yesterday (January 23), Prime Minister Pedro Sánchez agreed to declare the Llevant area a disaster zone after visiting areas affected by Storm Gloria. He has pledged to do whatever was necessary help people and businesses get back on their feet and that “we are not going to spare any resources.”

He also expressed his commitment to the Government of the Balearic Islands and the Consell de Mallorca, both who had asked for Llevant to be declared a disaster zone.
Talking to the press, Sánchez said: “I did not want to miss the opportunity to be in Mallorca and help the Government to resolve the situation the island is facing so close to the tourist season.” He added that he will “respond to the needs of those affected with the urgency they deserve.”

As Euro Weekly News understands, the Prime Minister will also visit Valencia, Murcia and Andalusia in the next few days to assess the damage caused by the storm in those regions.