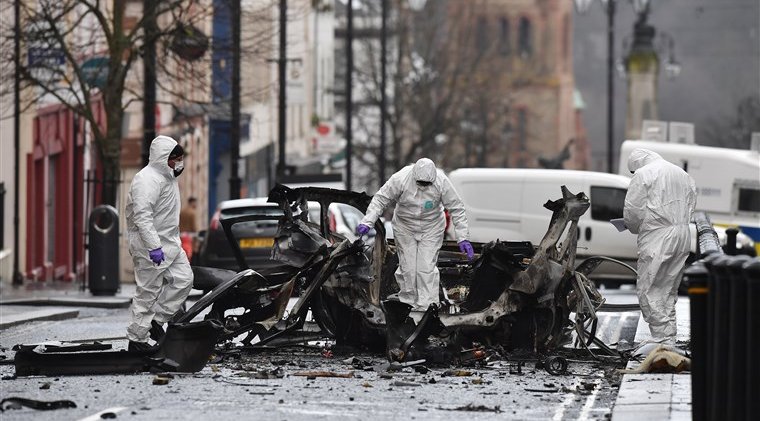 A vehicle used as a car bomb on a recent attack by the IRA in Londonderry, Northern Ireland. Credit: Charles McQuillan.

A COVERT recording of a conversation between a man allegedly attempting to buy weapons from a British Secret Service Agent in Spain’s Mallorca has been played at a trial in Belfast.
Colin Francis Duffy, Harry Joseph Fitzimmons and Alex McCrory are accused of belonging to the IRA and preparing to carry out terrorist gun attack on a police convoy.
The discussion between Colin Duffy, 52, and an undercover operative was played to the court this week, recorded four months before the attack. It was alleged that Mr Duffy struck up a conversation with a businessman called Goran while on holiday in the coastal town of Santa Ponsa where part of the recording features the men discussing Semtex, RPGs, detonators and the price for their transportation.
The prosecution states that the recording is Mr Duffy talking to a British Secret Service operative posing as an eastern European businessman who fought in the Yugoslav Wars. Recorded on August 28 in 2013, the two men came became acquainted after the Secret Agent asked Mr Duffy for a lighter for his cigarette.
In a recording that lasts almost four hours, Mr Duffy asks if he could sell him tanks and then for other deadly weapons, saying “Are we talking explosives, detonators that type of stuff? Your bring it, I pay.”
When the agent mentions Semtex, Mr Duffy said: “Semtex, you can get that like, seriously?” adding “you bring it to a spot, I pick up and I pay.”
Also discussed were snipers and grenades, with Mr Duffy asking the agent if they can penetrate armour. The pair also exchange numbers and discuss meeting at a later date in Amsterdam.
Four months after the recordings were made, a police convoy came under a gun attack in northern Belfast with Mr Duffy, Mr Fitzsimons and Mr McCrory all charged with offences related to the crime. This includes preparing and directing terrorism, attempted murder, weapons possession and belonging to the IRA. All three men deny the charges.
The trial continues.
Established in 1919, the Irish Republican Army (IRA) is a republican paramilitary organisation that sought the establishment of a republic and the end of British rule in Northern Ireland. The IRA’s purpose was to use armed force to render the rule which was marred by bombings, assassinations and ambushes.