The Splash – Expected to make Waves 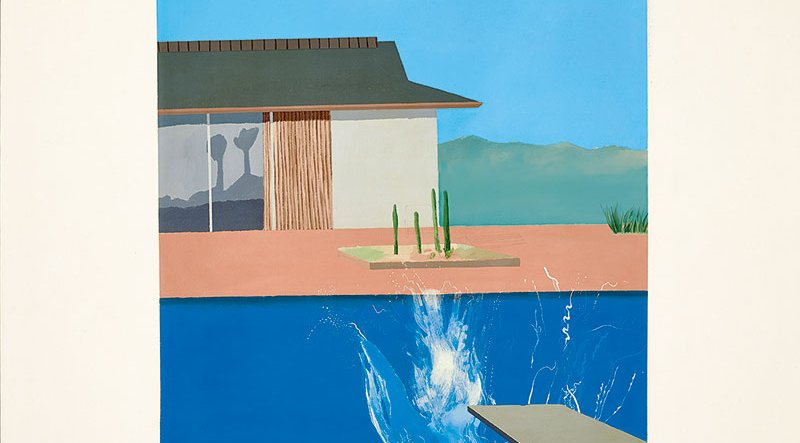 LONDON in the 1950s and 1960s was a dull and dark place , the rest of the UK even more so. To visualise the towns and cities is to imagine cleared bomb sites and piles of rubble that were still being cleared.

To go from Yorkshire to Los Angeles in 1964 is to leap from dark shadows into the light. Of course the Swinging Sixties were just getting going and by 1968 the Summer of Love had happened, it was all over.

London, February  11, 2020 ‘The Splash,’ a painting created by the artist David Hockney will be offered at auction. ‘The Splash’ has come to symbolise for some that sudden 1960s’ transition from the past to the future when the world seemed suddenly young and filled with possibility.

Between now and February 11 ‘The Splash’ will go on a world tour visiting Hong Kong, Taipei, New York and then to London where it will be the star of auctioneer Sotheby’s Contemporary Art Evening Sale.

The work on offer is the second of three versions of ‘The Splash.’ One, the ‘Bigger Splash’ is in the Tate Collection. Another, the ‘Little Splash’ is in a private collection and has never been offered publicly.

‘The Splash’ is a slight variation in composition to the version in the Tate. How significant is this painting?  “Not only is this a landmark work within David Hockney’s oeuvre, it’s an icon of Pop that defined an era and also gave a visual identity to LA. Even looking beyond the 20th century, few artworks have attained as mythic a status as this painting.

David Hockney first visited Los Angles in 1964, on his return to England that year he began work on his first pool painting: ‘Picture of a Hollywood Swimming Pool’ which sold at Sotheby’s New York in November 2019 for US$7.2 million.

Hockney relocated from London to Los Angeles in 1966 and between the summers of 1966 and 1967 ‘The Splash’ and many of the other instantly recognisable works of David Hockney were created.

‘The Splash’ embodies much that David Hockney found so appealing and attractive of California.

The painting also confirmed his reputation as an international artist whose virtuosity had combined three disparate artistic movements Pop Art, Modernist Abstraction and Minimalism and made the style his own.

‘The Splash’ fixes a moment in time, a fleeting moment, a second after a diver has broken the calm surface of a swimming pool. The painting’s central character is present, yet not present, masked by a splash of water.

The work is one of the most celebrated and instantly recognisable works of art of the 20th century. It is also expected to make a splash at auction with an estimate six times what it achieved at auction at Sotheby’s London in 2006. Current estimates lie between £20 million and £30 million.