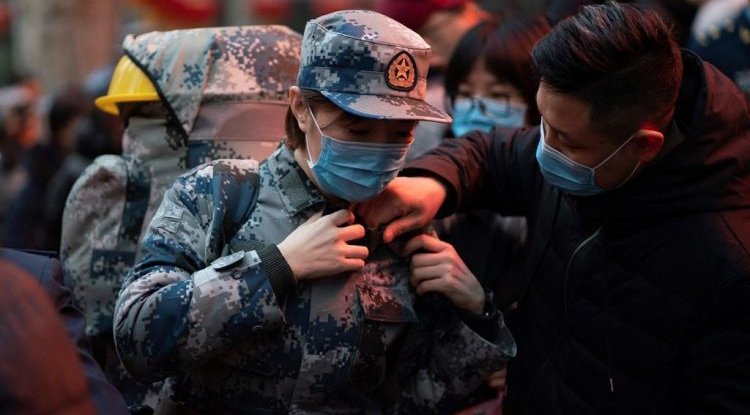 Wuhan China: Attempts to halt the spread of the virus have so far failed. A soldier is being checked for symptoms by an health official

The death toll from the coronavirus has risen to 80, China’s National Health Commission has said, in the UK More than 50 people were tested but all received negative results.

There were 769 reported new cases confirmed on Sunday, bringing the total number of infected to 2,744, a further five news cases being examined in Hong Kong and two in Macau.

Chinese President Xi Jinping called the outbreak a grave situation and said the government was stepping up efforts to restrict travel and public gatherings while rushing medical staff and supplies to the city at the centre of the crisis, Wuhan, which remains on lockdown. China’s health minister Ma Xiaowei said travel restrictions and other strict measures should bring results “at the lowest cost and fastest speed”.

The US Consulate in Wuhan plans to evacuate its personnel and some other Americans aboard a charter flight, while the UK, France and Japan are weighing up similar decisions.

The epidemic has revived memories of the SARS outbreak that originated in China and killed nearly 800 as it spread around the world in 2002 and 2003.

Chinese travel agencies have been told to halt all group tours, and concern is growing over the potential impact of millions of people travelling back to the cities after the Lunar New Year holiday ends on Thursday.

The health commission said anyone travelling from Wuhan is now required to register with community health stations and quarantine themselves at home for 14 days – the virus’ maximum incubation period.

Xinhua said medical supplies are being rushed to the city, including 14,000 protective suits, 110,000 pairs of gloves and masks and goggles.

The commission said it is bringing in medical teams to help handle the outbreak and the Chinese military dispatched 450 medical staff, some with experience in past outbreaks, including SARS and Ebola, Xinhua reported.