AGAINST ALL ODDS: Baby born with brain probing from skull celebrates first birthday 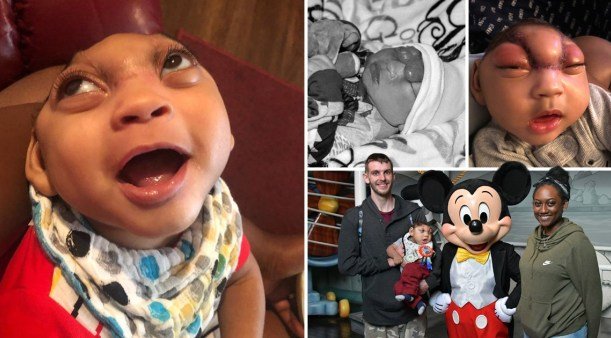 A devoted mother who refused an abortion when doctors found her baby’s brain growing outside his skull says he is thriving one year later.

Omobolo Gordan, 25, from Texas, says her son Ozzie’s smile warms the heart of anyone who meets him. The British-born mother and her husband hope that by sharing their story, will show that miracles do happen.

The couple first found out that Omobolo was pregnant in early 2018, and couldn’t wait to welcome new life into the world.

The early months of her pregnancy appeared to be normal, and showed no signs that anything could be wrong, but everything was about to change when medical staff were unable to measure the unborn child’s head at her 20-week scan. A specialist confirmed that the scan appeared to show an opening on the skull that was causing enephalocele, a rare type of birth defect where the brain protrudes outside of the skull.

Omobolo and her husband were offered a termination, but refused as they wouldn’t know what condition their baby had until birth.

In October 2018, later that year, their son confirmed doctors fears and was born with the rare condition, which covered a third of his face and a misshapen skull. Ozzie’s illness means he has delayed development and is unable to walk or crawl, and tests relating to his vision and hearing are inconclusive.

The little boy also suffers from spasticity and seizures but is on medication to keep these under control. Omobolo says she was in a ‘dark place both mentally and emotionally’ for the first few months of her sons life. However, after speaking to parents who have children with the same condition as Ozzie, things became easier for the couple. She said ‘people are always telling us how much of a miracle and a blessing Ozzie is to our family. Surprisingly, people in public always have something positive to say.

‘We do catch stares sometimes but I understand that people can be curious and shy to ask questions but we are always open to answering people’s questions about Oz and educating them as much as we can about his condition. ‘We have had other special needs parents some that we know and some that we don’t know reach out to us and express their gratitude of us doing the right thing by Ozzie and being there for him and loving him the way we do. ‘We really just hope to give him the best life possible. God willing, he lives a long time we strive to make it as normal as possible for him and to embrace his differences among his peers.

After Omobolo and husband Checotah started sharing their story online, they have received support from all over the world and say the reaction has ‘completely surpassed expectations’.

‘I just want families that are going through the same thing we’ve experienced to know that even though it may feel like it, they are not alone.’