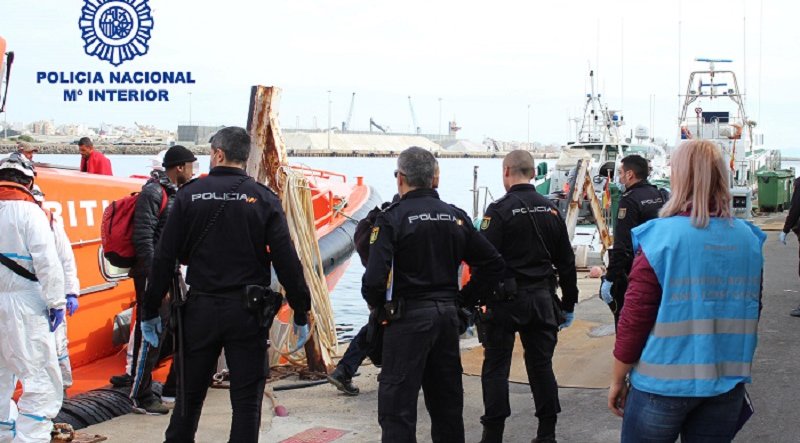 HEAVY PRICE: Each immigrant paid the equivalent of between €1,500 and €2,000 to risk the crossing CREDIT: Policia Nacional Almeria

ALMERIA police have arrested five Algerian citizens for trying to get dozens of illegal immigrants into Spain via the Almeria coast.
Police said the five were in charge of three small boats intercepted on different days en route between the North African nation and the provincial coastline. The craft carrying 40 Algerians in all were all found drifting, putting the occupants’ lives in danger, by the time the authorities caught up with them and rescued everyone on board.
According to police the organisations the detainees worked for began looking for people prepared to risk the illegal crossing to Spain at the end of last year. They charged each immigrant the equivalent of between €1,500 and €2,000 for their place on a boat.
Police investigations revealed the immigrants had been allocated positions on the dinghies according to their height and weight. The skippers also instructed them that in the event of being caught by the authorities they were to say that had all taken turns at the helm and in using the navigation and orientation systems.
However, due to the precarious state of the boats and a lack of fuel, the three which set off on successive days from Algerian beaches all ran into trouble before they made it to Almeria.
Police investigations carried out with the support of the European Border and Coast Guard Agency (FRONTEX), along with interviews with the boat occupants, led to the identification of the five who had been skippering the craft.
All face charges for crimes against the rights of foreign citizens and are being held in prison awaiting trial.