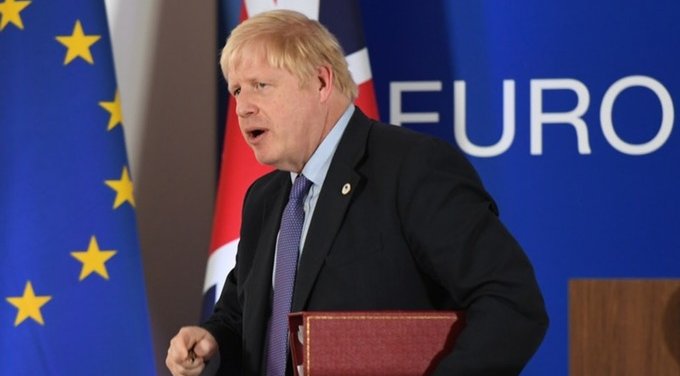 Boris Johnson: his "nations address" speech that is being filmed this morning will be broadcast tonight at 11.00pm GMT

The Prime Minister insists Brexit marks “not an end but a beginning”, very little will change at the moment of Brexit as a result of the deal which Mr. Johnson agreed with Brussels and the 27 remaining member states.

And in what Number 10 billed as an “address to the nation” released an hour before the moment the UK leaves the EU, Mr. Johnson will sound an optimistic note about the future and promise to heal the divides which have been caused in the bitter Brexit battles.

He will say: “Our job as the government – my job – is to bring this country together and take us forward to the moment when the dawn breaks and the curtain goes up on a new act”.

“It is a moment of real national renewal and change, this is the dawn of a new era in which we no longer accept that your life chances – your family’s life chances – should depend on which part of the country you grow up in.”

The address was being filmed by Downing Street rather than one of the national broadcasters in the latest clash between Number 10 and the media.

Traditionally, speeches by the PM in Number 10 have been recorded by a single broadcaster and then shared with other television networks, in what is known as a “pool” system.

As 11 pm arrives, Big Ben will remain silent, despite a high-profile campaign fuelled by Mr. Johnson, for repair works to be halted to allow Parliament’s bell to ring.

But on Parliament Square, Brexiteers will gather for a party led by Nigel Farage, while Union flags are already flying around Westminster.

Regular updates will be posted throughout this historic day for the Uk.