Keeping up with tradition 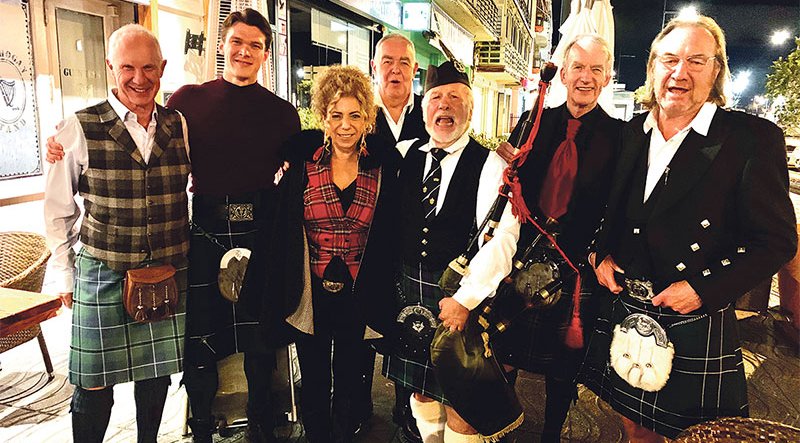 BURNS NIGHT: Paying tribute to the National Bard of Scotland.

I heard that Burns Night was coming up and also how quickly these privately organised events across our city sell out, which is why I was delighted to be invited by ‘Lord and Lady Kayll’ and not miss out again.

I had a really fun evening: all my dining companions were more than entertaining as was the poetry, traditional songs, pomp and ceremony. Campbell did the immortal memory speech and the Selkirk grace in Gaelic!

There was a raucous feel to the whole evening encouraged undoubtedly by Leslie Thomson on the bagpipes that kept the Scottish theme at the forefront, intermittent with Jon’ songs that similarly had everyone rocking from side to side in their chairs, arms in the air and whisky in hand. Others actually got up and jigged.

I loved all the guys in kilts too!! There is truly nothing like a man in uniform, even if it is a kilt, as you can see from the photo!

Thanks to this event I also took the time to find out what Burns Night is all about. It’s amazing how ignorant ‘one’ can be. In case there’s anyone else out there who thought it was a Scottish take on bonfire night, it’s not. It’s a day to pay tribute to Robert Burns, the National Bard – poet – of Scotland.

Each year on January 25 since 1801, Scots around the world gather and basically have the time of their lives from my experience! Burns is mostly renowned for his poetry, but apparently he wrote even more songs than poems, one of the most emblematic being Auld Lang Syne.

It’s cool to have reason to learn more about one another.  We could all learn so much more with just a little effort and I don’t just mean on a cultural level.

Apart from the excellence of the event I think it also worthy to comment on the exceptional coordination once again of The Hogan Stand owners and team to ensure the perfect night for their guests.

Many a restaurant could learn a thing or two from their exceptional value for money, great food and service, which is always friendly no matter how many people they’re serving!

As a final anecdote to Burns Night being surrounded by so many men in kilts, ‘one’ had to ask, not that I think I really wanted to know, what they were wearing underneath.

Even the kilted Swede in the group assured me that this is a trade secret, in true keeping with tradition.