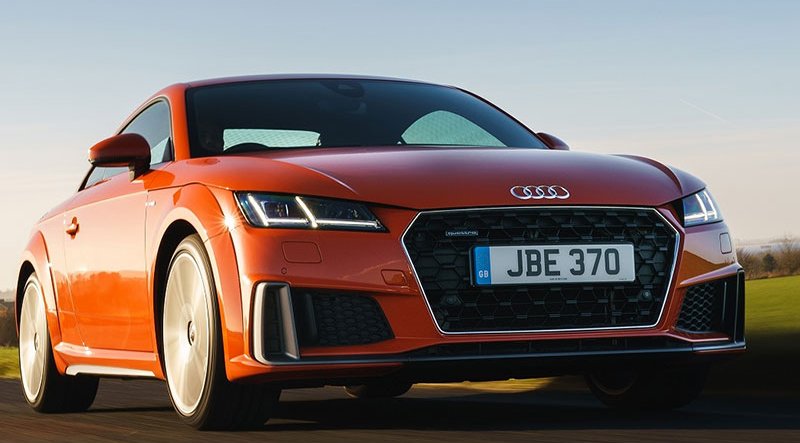 WHEN Audi launched its TT model back in 1998, it quickly established itself as  an iconic sports coupe and more than  20 years later, the TT is still one of the most instantly recognisable and charismatic sport cars.

With outstanding build-quality and Audi’s cool image, the TT is relatively accessible to a mass market with prices starting from €37,745 (£32,165) for the entry level Sport version, which is quite well equipped and offers zestful performance.

There are several other power outputs available – including the high-performance flagship RS versions – and also front or all-wheel drive options.

With the popular 2.0- litre 194 hp petrol engine and standard seven-speed automatic transmission – a manual gearbox is available on some models – it has a quick 0-100 kph time of 6.4 seconds and a top speed of 249 kph (155 mph). Despite those performance credentials, it returns average fuel economy of 14.3 kpl (40.4 mpg) and emissions of 138 g/km.

Underway, this TT immediately impresses with its smooth acceleration and slick responsive auto gearshifts. The suspension is understandably quite firm which helps deliver rail-like grip on the corners and minimal body lean. The steering is very precise and adds to the feeling of assured driver control.

The styling of the car is distinctive with its low wide road stance, large gaping front grille and narrow headlights. The cabin has a robust quality appearance with a simple  and straightforward dashboard.

Unusually, there is no central screen. Instead you get Audi’s ‘Virtual Cockpit’ which has  a digital display located behind the steering wheel for easier and safer viewing and operates via a rotary control.

Front occupants get plenty of space but the rear seats are in effect just for children. Luggage capacity is very good by sports car standards with a boot-space of 305 litres easily accessible by a large tailgate. Rear seats do fold flat to boost load space to 712 litres.

While it has several rivals in its sector, the TT still has the overall style and cachet to maintain its status as an aspirational sports coupe which is still at the head of the pack.

Facts at a glance