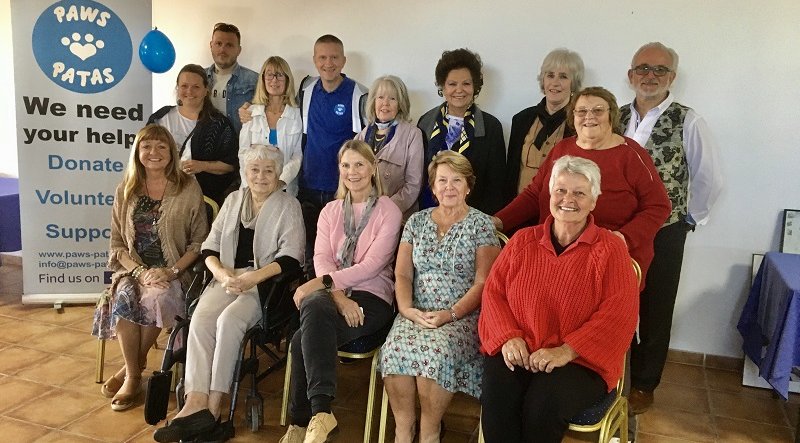 THE PAWS-PATAS animal charity continues to move forward as it enters what is the start of its fourth decade of operations on the Costa Almeria.
“The homing of dogs and cats has never been healthier, not only in Holland, Germany, Belgium and the UK, but locally as well”, the charity’s Chrissie Cremore told the Euro Weekly News.
What’s more, there has been significant progress on the two major items on the PAWS-PATAS agenda for last year.
Chrissie reported that €30,000 has already been raised towards the target of €40,000 for a much-needed quarantine unit for the PAWS-PATAS shelter, which is expected to be completed before the summer.
She particularly praised Ann and Brad Swift for being “a major source of this vital fundraising” through organising a variety of events in Mojacar.
Meanwhile the PAWS-PATAS Trapping, Neutering, Returning (TNR) campaign “has taken a major leap forward”, Chrissie said.
Discussions are currently underway with local councils and a worldwide charity to collaborate on the campaign aimed at reducing the local feral cat colonies and preventing unnecessary suffering from disease and starvation.
The animal charity’s AGM celebrated on Saturday in Turre attracted a record number of members and new people interested in joining, boding well for the charity’s efforts over the coming year to rescue and re-home abandoned cats and dogs and to address the local feral cat situation.
A new executive committee was voted in. It was also a chance to thank all the volunteers who work in the four PAWS-PATAS fundraising outlets in Mojacar, Turre and Las Buganvillas.
“The revenue they raise is paramount and the shelter would not exist without them”, the committee’s Janet Franklin told the meeting.
There were special thanks too for Vanessa Maipauw and Sam Spencer, who manage the PAWS-PATAS kennels and cattery.
Last year was a very upsetting and exhausting one for both. Parvovirus in dogs and Panleukopenia in cats were virulent due to infected puppies and kittens abandoned at the shelter gates.
“These diseases created havoc and it was extremely depressing for all the volunteers because the shelter had to be closed and a major cleaning operation put into play”, Chrissie commented. “Many animals were treated and survived, but sadly there were some fatalities, which was heartbreaking for the volunteers.”
Both the executive committee and the volunteers took the opportunity to express their gratitude to all the people who donate items to the charity’s outlets, food, money and time, whether walking the dogs or socialising with the cats.
What PAWS-PATAS desperately needs now is a fundraising team, Chrissie told EWN, “people with vision, determination and organisational skills to co-ordinate fun events and raise funds.” The charity is also looking for anyone with IT and website experience to take a look at whether its systems are working correctly or need updating.
On the matter of homing animals overseas, PAWS-PATAS Homing Executive Renee Fortuin now has connections with a German shelter which is able to provide transport from Cartagena or Alicante. However the charity is looking for short-haul drivers to take animals to connect up with the German transport.
Added Chrissie, “Although the impact of Brexit and homing in the UK is still unknown, it is anticipated that we will need to arrange more transport to Holland. Ideally we need a further four or five drivers to do the trip once a year.
“Further volunteer help is needed with ‘foster homes’ for dogs who will be going overseas. Fostering them for one month would help socialise them and keep them safe from any possible disease.”
There is full information on PAWS-PATAS on the charity’s website www.paws-patas.org. Alternatively contact them by email at [email protected].
For enquiries about cats or dogs email [email protected] or [email protected]