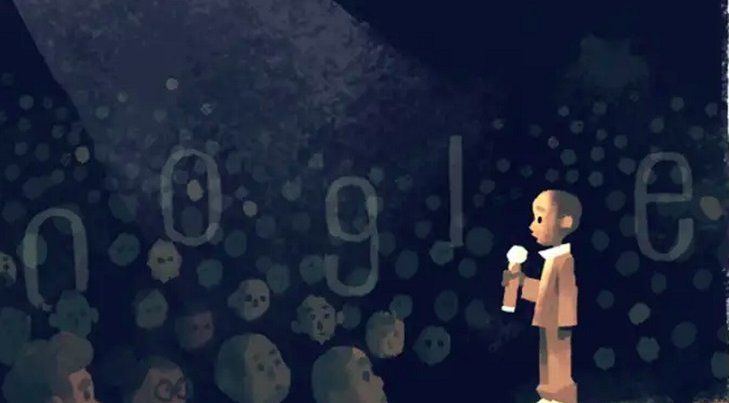 Google has honoured AIDS activist Nkosi Johnson with a Doodle!

Today would have been the 31st birthday of South African AIDS activist, Nkosi Johnson.

HIV positive since birth, Johnson was instrumental in changing public perception of people living with AIDS. In his short life, he campaigned for the rights of HIV positive people, destigmatising the disease by speaking publicly and candidly about what it was like to be a child with AIDS.

Nkosi first hit international headlines in 1997, when a local primary school refused to accept him as a pupil. In the face of severe prejudice, his adoptive mother, Gail Johnson, organised workshops to educate people about AIDS. She eventually persuaded the South African parliament to pass legislation that required schools to adopt anti-discrimination policies.

Nkosi was able to attend a school like any other child, but once in the public eye, Nkosi continued to bravely speak out about his experiences living with AIDS.

In 2000, he was invited to speak at the 13th International AIDS Conference. Just 11-years-old at the time, Nkosi made a stirring speech that held delegates in an “occasionally tearful silence”.

Televised around the world, Nkosi told his story and urged people with AIDS to seek equal healthcare. He ended his address by imploring the world: “Care for us and accept us — we are all human beings. We are normal. We have hands. We have feet. We can walk, we can talk, we have needs just like everyone else — don’t be afraid of us — we are all the same!”

Nkosi and his mother, who had adopted him when his birth mother became debilitated by AIDS, set up an NGO to help HIV positive mothers and children. Nkosi’s Haven is still operational today.

Tragically, Nkosi died of AIDS-related complications in 2001, at just 12-years-old.  At the time of his death, he was the longest surviving child with AIDS in South Africa. His life was short, but his legacy has been substantial.

*A Google Doodle is a special, temporary alteration of the logo on Google’s homepages intended to commemorate holidays, events, achievements, and notable historical figures.