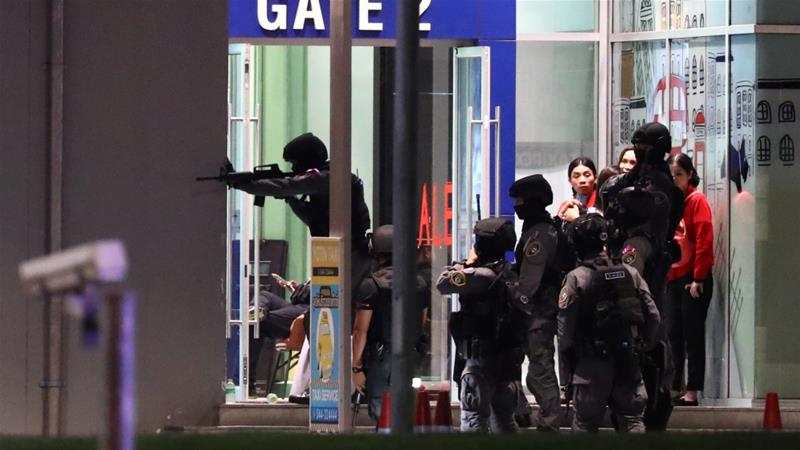 THE HORRIFIC mass shooting in Thailand has resulted in 20 people being confirmed dead, with 31 others seriously injured.

As the reign of terror unfolded, police and soldiers rescued hundreds of people inside of  the Terminal 21 shopping centre in Korat after gunman Sergeant Major Jakapanth Thomma stormed the building wielding a haul of weapons.

The massacre began around 3.30pm (local time) when the soldier shot dead his commander and two others at the Surathampithak army camp where he stole numerous weapons and ammunition including a machine gun before fleeing in a stolen Humvee.

He then drove to the Terminal 21 shopping mall firing at multiple civilians, fleeing inside the complex which at the time was packed with thousands of shoppers who were celebrating the long weekend. Local sources indicate that many more people were slain inside the shopping centre with the gunman live-streaming the mayhem on Facebook Live before his account was shut down.

Defence Ministry spokesman Lieutenant General Kongcheep Tantrawanit said that 20 deaths had so far been confirmed and that 31 people were reported to be seriously injured. He also added that the death toll is expected to rise considering the nature of this atrocity.

The officers who stormed the building late Saturday evening urged the gunman to surrender but they were met with angry shouts and more gunfire. It was also reported that the police took the gunman’s mother from the Chaiyaphum province to Korat in the hope that she could persuade her son to surrender – an attempt that has so far produced no results.

Local media had shared a video of the soldier getting out of the stolen vehicle in front of the mall around 6pm and firing a series of shots, sending people running for their lives as gunshots can be heard in the background. The attacker then fired at a cooking gas cylinder, setting off an explosion and fire.

Local media reports that the shooter livestreamed the attack #koratshooting#กราดยิงโคราชhttps://t.co/1oJn0qCWVipic.twitter.com/OFeJcbROFS

Troops from a special warfare unit were dispatched to the shopping centre fearing for the lives of at least 16 people that Tantrawanit took hostage on the fourth floor. Police confirmed to the press around 11.30pm (local time) that they had taken control of floors G, 1, 2 and 3 in the complex, but were not able to intercept the floor where the hostages are being held.

Footage from inside Terminal 21 #Korat of some people who were trapped being escorted out to safety. #KoratShooting pic.twitter.com/JZxcZrbQ8X

The attacker had live-streamed his massacre on Facebook Live and posted a chilling selfie showing him holding a rifle where he said that he was tired and could barely move his fingers.

His Facebook account was taken offline a few moments later with a spokesperson for the social media platform confirming that it had taken the decision to remove any content related to the attack. In a statement they said:

“Our hearts go out to the victims, their families and the community affected by this tragedy in Thailand. There is no place on Facebook for people who commit this kind of atrocity, nor do we allow people to praise or support this attack.”