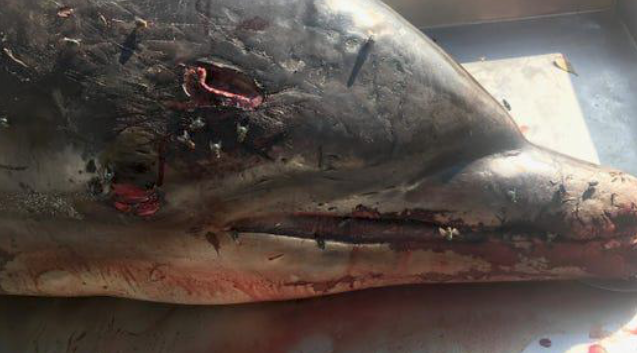 The defenceless mammal was found mutilated in Florida. Credit: NOAA.

A $20,000 reward is being offered for information on the deaths of two bottlenose dolphins who were found with bullet and stab wounds in the US state of Florida.

The first was found last week off the coast of Naples with a bullet wound in its face and injuries from a sharp object, according to biologists from the Florida Fish and Wildlife Conservation Commission who examined the dolphin.

A few days later, a second dead dolphin with a bullet wound to the left side of its body was found along Pensacola Beach by experts from the Emerald Coast Wildlife Refuge.

The National Oceanic and Atmospheric Administration (NOAA) has condemned the atrocities and will now offer a monetary reward for any information on the perpetrators behind the abhorrent cruelty.

Tracy Dunn, the assistant director of NOAA’s Southeast law enforcement division said: “These cases can rarely be solved without the public, people coming forward and saying they might have seen something and we can follow up on that.”

Bottlenose dolphins are one of the most popular marine mammals roaming the coast of Florida with many residents and visitors feeding the species. However, biologists believe these ‘thoughtful’ actions lead to dire consequences as dolphins now associate humans and boats with food which can put them in harmful situations.

The injuries sustained by the two dead dolphins are believed to have been carried out at close range, meaning that the responsible individual or group were able to get in close proximity to the mammal. An NOAA spokesperson stresses that to prevent harm to wild dolphins, civilians should not feed them.

It is also against federal law to feed or harass dolphins which is strictly prohibited under the Marine Mammal Protection Act. Penalties can include a $100,000 fine and up to one year in jail with the NOAA actively enforcing this rule to protect the species.