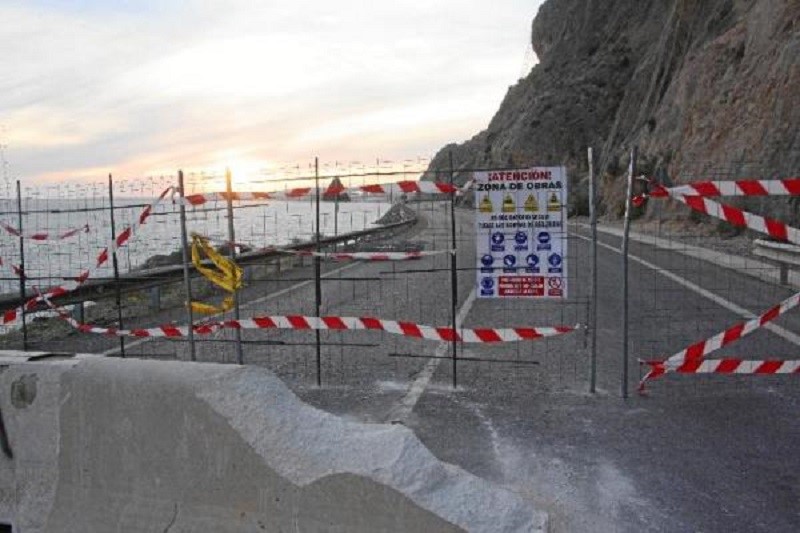 THE Sub-delegation of the Government in Almeria insists works to allow the reopening of a section of the N-340 coast road connecting Aguadulce and Almeria are progressing as fast as possible.
A stretch of the ‘El Cañarete’, as the road is more commonly known, has been closed to traffic ever since a nearly four-tonne rock crashed down on the highway on New Year’s Eve. The Sub-delegation explained it had to be immediately cut off to vehicles in both directions due to the risk of further landslides.
Once the Ministry of Transport, Mobility and Urban Agenda’s Infrastructure Secretary General approved the €640,000 emergency project to repair the damage, the first phase of the works got underway on February 5.
The Sub-delegation reported the works are going according to plan and at this stage there is no reason to suppose they will not be completed within three months as originally forecast. There is also the chance that once the first phase involving clearing rocks from the roadside embankment is done and dusted, possibly by the first week of March, that it could in the meantime be opened intermittently to traffic.
The Sub-delegation maintains it has worked as speedily and in the most coordinated way possible to resolve the El Cañarete situation. It also affirmed the ministry had approved the emergency works “almost in record time”, given that authorisation from the Cabinet was also necessary.
Government Sub-delegate Manuel de la Fuente said he regretted the nuisance created by the road closure.
“I empathise with the inconvenience to the affected drivers”, he commented, but stressed that “everything possible at the technical and human level is being done, in coordination with the Highway Demarcation, the Provincial Traffic Police Chief and the Guardia Civil Traffic Group.”
He added, “I trust in the possibility of opening El Cañarete intermittently, a solution considered as a short-term solution to ease this situation and make it more tolerable until the works are finished.”
The Sub-delegation explained that the second phase of the works will begin as soon as the first phase is completed and will entail creating holes in the embankment and introducing steel cables plus a cement filling to keep them in place with a view to ensuring large rocks remain anchored.
In the third phase anti-landslide barriers will be installed to intercept any rocks which do come down and a ‘curtain guide’ to prevent falling rocks away from the barriers.
While all these works are going on there is a reinforced Guardia Civil Traffic Group presence on the A-7 motorway doing rush hours, backed up by a Directorate General of Traffic Department helicopter, in order to be able to deal with any incidents as soon as possible.