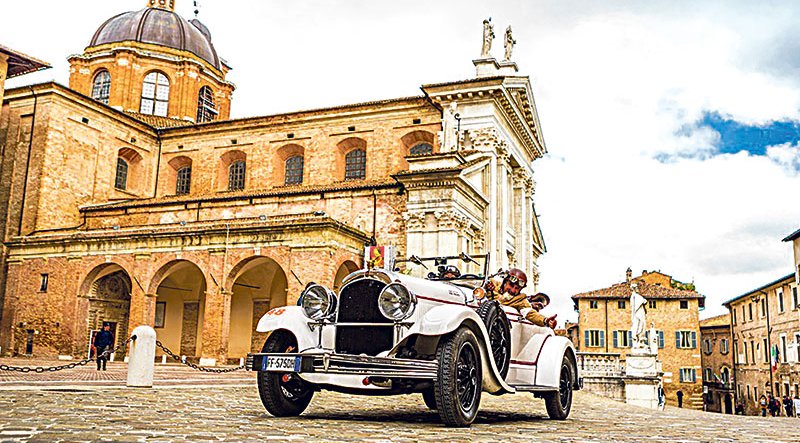 One of hundreds of vintage sports cars passing through an Italian town square during the 1000 Miglia 2019.

FOR a select few with the means, a qualifying vintage race car as well as the means to run a team to support you throughout, the 1000 Miglia car race would be the classic style in which to tour the northern provinces of Italy.

For others who have the time and means, a next best choice would be to follow the race one way or another. For vintage car enthusiasts this is the race and the place to be in May. The food, the petrol, the views and the historic sights as well as the sounds of many sports cars pushing on.

On the starting line of the most important vintage car race regularly held there is an expected 400 cars starting this year.

The cars will be selected from among those registered on the site www.registro1000miglia.it.

By the end of 2019 there were more than 600 cars registered, more have no doubt since registered for the this year’s race. From among the registered cars just 400 will be selected for the 2020 race after strict examination of the entrants. There are two types of registration. The first is ‘Participant Car 1000 Miglia 1927/ 1957’ which is reserved for the individual cars, identified by number plate or chassis which were originally registered for at least one edition of the 1000 Miglia from 1927 to 1957.

The second type of entrant is ‘Eligible Car 1000 Miglia,’ which certifies eligibility for the modern commemoration of the Race belonging to a model type registered for at least one edition of the 1000 Miglia from 1927 to 1957.

Enzo Ferrari called the 1000 Miglia ‘A travelling museum unique in the world’ and since 1927, the year of the first edition, the race has maintained its unique attractions, not only a car race but also a mix of history and a journey through the beauty of Italian cities, villages and countryside.

The route; the start line is in Brescia with the long procession of vintage cars crossing the picturesque towns of Lake Garda, Desenzano and Sirmione continuing on through Villafranca di Verona, Mantua, Ferrara ad Ravenna finishing at Cervia – Milan Marittima.

The second day will see the race start from Cesenatico and swing through Urbino, Fabriano, Macerata , Fermo and Ascoli Piceno and Amatrice. From Rieti the vintage cars will arrive in Rome where after the usual parade through the streets of the Eternal City, Day Two will end on the via Veneto.

The third and longest  days racing on Friday May 15 will start in the early morning and will see the cars transit Ronciglione, Radicofani, Viterbo and Castiglione d’Orica, pausing at the magnificent Piazza II Campo di Siena. Leaving Lucca the cars will leave Tuscany crossing the Cisa Pass to the day’s finish in Parma, the 2020 Italian Capital of Culture.

The fourth and final day of the race will see the route pass from Salsomaggiore Terme from the village of Castell’Arquato [Piacenza] and from Cernusco sul Naviglio a town in the province of Milan, named as the European City of Sport 2020 , then on to Bergamo before finally arriving at the finish on the Viale Venezia in Brescia. The race is no longer as dangerous as the original however that does not detract from its many attractions. Make a date one way or another to follow the car of your day dreams.