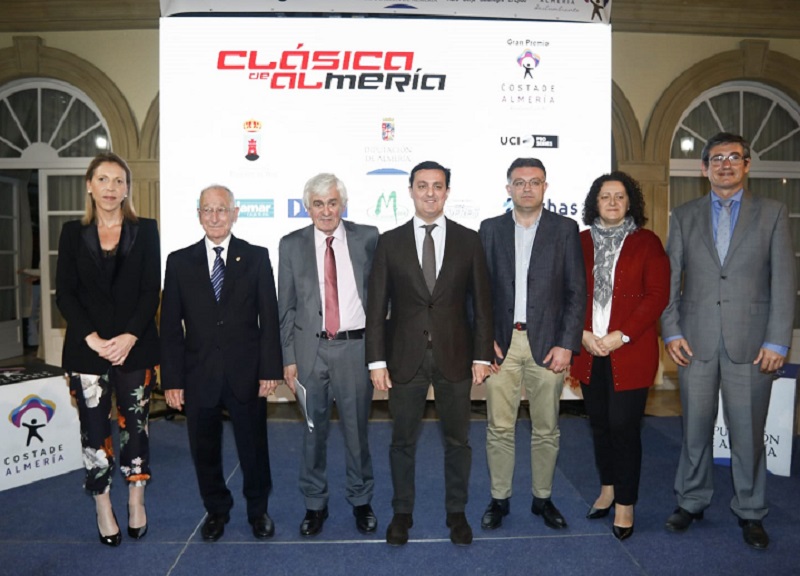 BENEFITS: The provincial government president underscored the major impact of the race on the Costa Almeria economy and tourism CREDIT: Diputacion de Almeria

THIS Sunday’s ‘La Clasica’ cycling race is set to raise Almeria’s international profile as an attractive sporting destination.
The event featuring some of the world’s top cycling teams will be broadcast throughout Europe on Eurosport 2 from 5.30pm to 6.30pm. It will also be shown on Eurosport 1 and 2 a further six times on subsequent days.
The broadcasts will be in 21 languages, with teams of commentators for each European region. As well as talking about the race itself they will give information about the Costa Almeria and the locations which the riders pass through.
On top of all this coverage, La Clasica will be broadcast outside the continent on channels with which Eurosport has agreements. These include the Mexican sports channel Claro Sport, which is watched throughout South America, and Discovery in the US and Canada. Sky Sports will broadcast the competition in New Zealand.
This will be the 33rd edition of La Clasica, which is now in the UCI Pro Series category: the second most important at international level.
Riders will cover a distance of 187 kilometres. They will start off from Roquetas de Mar at 1.15pm, and go through Adra, Berja, Balanegra and El Ejido before crossing the finishing line back in Roquetas. The fastest cyclists are expected to be riding down the Avenida Juan Carlos I just before 6pm.
Speaking at the event presentation earlier this week, Diputacion de Almeria President Javier A. Garcia said he hoped the event would in the near future be able to boast the logo of the UCI World Tour, the maximum international category.
Garcia congratulated the race organisation team for “for putting Almeria on the international map for this sport”.
He said they had managed to put the race in such a high profile position “without sacrificing a shred of its origins, when 33 years ago La Clasica started out as the ‘Ruta de las Hortalizas’ in a clear and well-deserved homage to our agriculture and to cycling.”
The Diputacion President underscored the major impact of the cycle race on the Costa Almeria economy and tourism. The event brings some 500 people to the province, he pointed out, while the TV coverage meant that “more than 200 million homes throughout the world will discover Almeria.”
There is, Garcia said, “a close relationship between sport and tourism in our province, a uniqueness which no other province in Spain or in Europe have, and we have to boast about that and say that we have the best place in the world to practice cycling or any other kind of sport.”