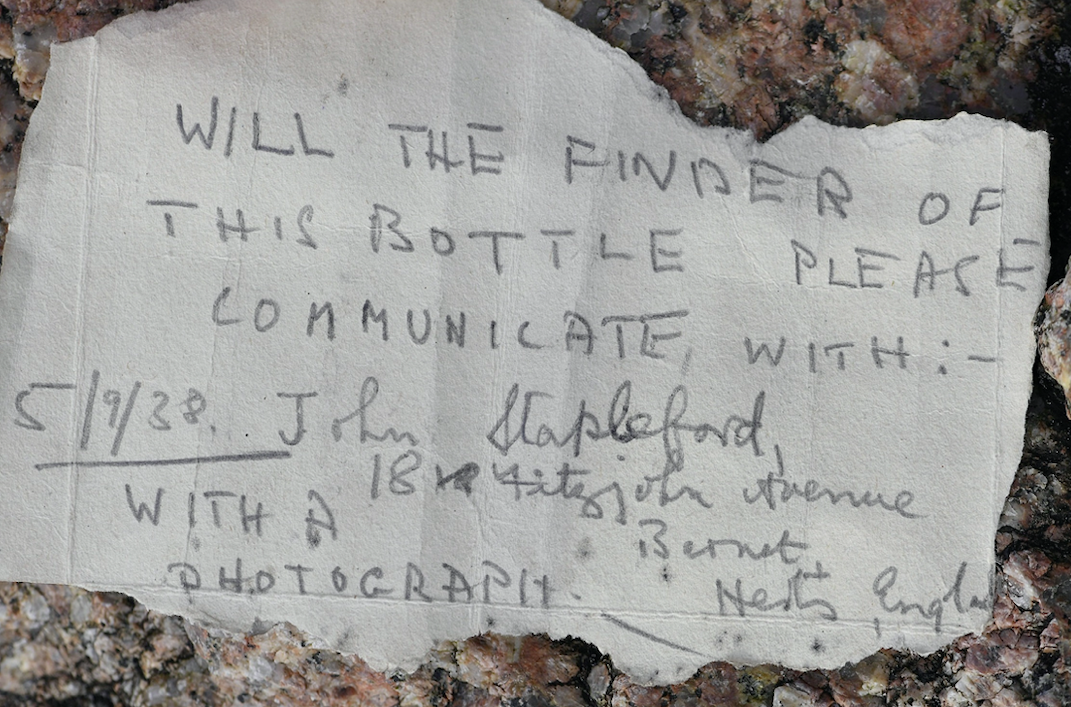 A search is on to find the writer of a message in a bottle that was discovered on a Jersey beach 82 years after it was written.

The bottle was found  on Tuesday morning by 55 year old Nigel Hills while walking his pet dog, Reggie, and was surprised to find a handwritten message on a piece of cardboard inside.

The note on the piece of cardboard was signed off by John Stapleford and dated 5 September, 1938, and miraculously it has survived 82 years floating around in the seas.

The note reads: “Will the finder of this bottle please communicate with: John Stapleford, 18 Fitzjohn Avenue, Barnet, Herts, England. With a photograph.”

The finder of the 82 year old note Nigel found the message on a beach at Bel Royal on the Channel Island of Jersey, and now is trying to track down the writer of the note or at least some family relatives.

Nigel said: “I was just walking along and saw it and thought it looked interesting. Then I saw the note inside.

“Unfortunately, I had to break it to get the note out.”

The note was written on the back of an old cake box from Cawley Bros Ltd, and was placed in a Smith’s bottle, both of which were based on the island.

Nigel  has shared his find on social media  and  soon hunted down the current resident of 18 Fitzjohn Avenue.

He said: “As is the way with Jersey, I had lots of people contact me to help and I have been able to track down the lady who currently lives in the property.

“She says she does not recall a John Stapleford and she has lived there for 30 years.

“But she has looked into the deeds of her home and found that a John Stapleford did buy the place in 1921.

“If he bought it then and was presumably in Jersey in 1938 it’s likely that he may have passed away”.

“It would be really nice if I could give the bottle and the note back to members of his family. It could be an heirloom for them.”

So if you know the family  or the writer you can find Nigel on facebook! Who knows they maybe living in Spain?