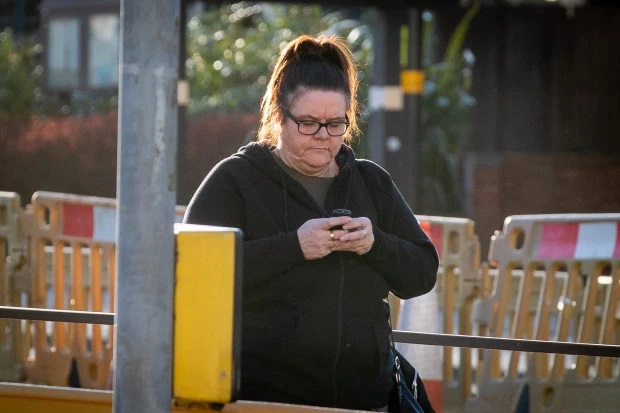 Back on the streets – female paedophile Vanessa George has ditched her bottle-blonde hair for a dodgy black dye job in a bid to evade detection by the public.

George, 49, was spotted recently with the new look on a shopping trip, a source said last night: “George had dyed her hair black in prison to give herself a bit of anonymity.

“When she came out she was so pleased to be out she went straight back to blonde but everyone clocked who she was immediately.

“She clearly thinks her new hairdo will mean she’s not recognised but she’s not fooling anyone.”

George was imprisoned for a series of sexual assaults on children at her Little Ted’s nursery in Plymouth, Devon. She was freed from HMP Send in Surrey after a Parole Board ruled she had shown remorse and could be managed safely in the community.

But sources say the monster — who now calls herself Hazel — is struggling with life on the outside after being freed from prison last September.

She spends her days alone in a halfway house, where she is shunned by all bar her probation team. George, who is feared to have abused as many as 64 babies, has no visitors. And she rarely ventures out except for the odd shopping trip.

Her release came despite the fury of the parents of children she abused, she is also subject to some of the toughest licensing conditions which include being exiled from Devon and Cornwall.

“Hazel” as she now calls herself, is also banned from going within 30 metres of any swimming pool and barred from going near children’s playgrounds, nurseries and schools. Officials can also order her to take a lie detector test at any time without notice.

When charged, George admitted taking up to eight photos a day of her abusing children at the nursery before trading them online with paedophiles.

The ringleader of the paedophile gang, Colin Blanchard, will be eligible for parole next year after being jailed in 2011 for a minimum of nine years.