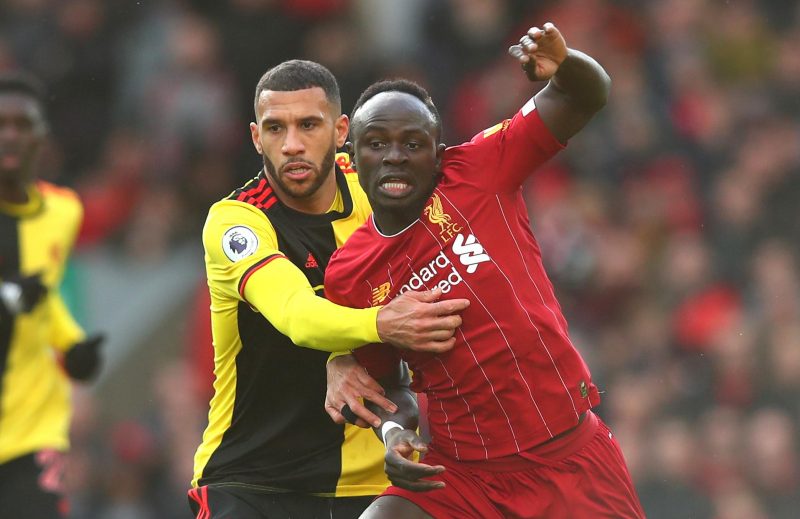 Watford 3 Liverpool 0
Those who know me will tell you about my dislike of Liverpool football club. Growing up in the 80’s at a time when they won everything was a big turn off for me as it seemed that every other kid in my school supported them while I was there in Cardiff City top during every P.E lesson. However not even I could say a bad word about them during this latest period of dominance as quiet simply they have been excellent both on and off the pitch as even manager Jurgen Klopp has that bit of class which every football fan wished was running through their club right now.
Going into the game Liverpool won their last 18 Premier League games, another win here would set a new record for most consecutive victories in English top-flight history and they only need another four wins to secure the Premier League title that has long eluded them. On the other hand time is running out for Watford to scramble to safety but a result would help them haul out of the relegation zone.
Watford made two changes from their 3-0 defeat by Manchester United last time out. Femenia came in at right back for Dawson, and Sarr started ahead of Pereyra. Liverpool also made two changes from the side who beat West Ham. Lovren made his first Premier League start since early December as Joe Gomez was out injured, Oxlade-Chamberlain also came in for Keita.
For the first ten minutes of the game Watford remained disciplined . They stuck mostly in their own half and was happy for Liverpool to have the possession. However the first chance fell for Watford as Doucoure fed Deulofeu as Alexander-Arnold allowed the winger to check inside too easily. Deulofeu then let fly with his right foo but it whizzed just over the crossbar.
Watford did their homework and targeted Alexander-Arnold weaknesses in his defending. In the 15th minute the home side got another opportunity. Deulofeu played a lovely one-two with Deeney to beat the young Liverpool right-back and cut it back to Doucoure. Doucoure looked to have an easy finish but Van Dijk made a crucial bock.
By this time Liverpool were struggling to break Watford down as the home team had all their players behind the ball constantly which made it hard for the visitors to find space in the final third.
To be honest the rest of the half was a non-event until just before the half time whistle Watford had a further chance. Masina looped a free-kick in and the home side kept the pressure on. The ball fell to Deeney who was six yards out but Alisson was out to block the shot. Deeney then tried to float the rebound into the far corner but it went just wide of the post. It was the closest either team had come to scoring.
With no changes made at half time Watford where quick to come out of the blocks. In the 46th minute Pereyra sent Sar through on goal. Sarr went for power with his left foot but the Liverpool goalkeeper got his hand to it to tip it over the bar.
The reds then started to liven up as on the 52nd minute their first real opportunity was presented to them. Sarr went to sleep and didn’t track Robertson’s run. Van Dijk found him with a beautifully weighted pass which forced Forster to make a stop. However just mounts later the home team deservedly took the lead as Sarr broke the deadlook. Liverpool didn’t deal with a simple throw-in, letting it bounce in the box. Doucoure stool it behind Lovern to hookit across goal and Sarr was there to stabit in from a few yards out.
Then five minutes later the home side doubled their lead as it was Sarr again who grabbed his second of the game. The Senegalese winger raced onto a ball behind the Liverpool defence and coolly dinked it past Alisson. Liverpool were really up against it now.
Midway through the second half the visitors made an immediate substation as Klopp brought on Lallana to replace Wijnaldum.
Liverpool then started to push and in the 65th minute it was substitute Lallana who hit the post. The England man had a go with his left foot as the ball dropped kindly to him outside of the box. His dipping volley had Foster scrambling across his goal but the ball just clipped the outside of the woodwork.
This was a test for Liverpools character now. It was the first time they’d gone two goals behind in a Premier League game since a game against Manchester United in March 2018.
But unbelievably the home side got yet another goal in the 72nd minute as Deeney’s goal surely secured a Watford win. Sarr drew Alisson out of his goal and passed back to Deeney, who floated the ball into the net from the left of the box sending the home fans absolutely crazy!
After that Liverpool looked shellshocked. Of all the teams that could have broken Liverpool’s unbeaten Premier League record this season, Watford were one of the unlikeliest contenders.
However they continued to try but nothing was coming off for them. Lallana had a shot blocked after receiving a ball from Robertson and four minutes from time Salah showed a flash of quality as he skipped past his man in the box. The Egyptian scooped the ball up for Origi but Foster raised his arms to clear it.
As the referee blew for full time Vicarage Road went into party mood and so did every other football fan who grew up disliking the monster which is Liverpool Football Club.