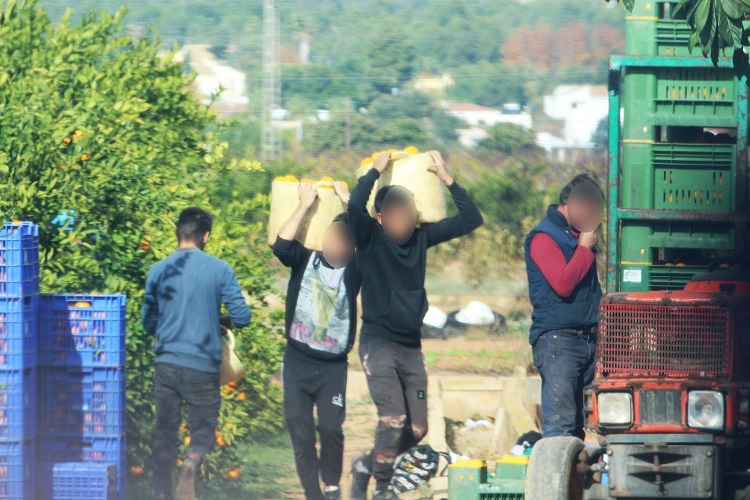 A Romanian “slave” gang in Onda, Eastern Spain, was busted by Policewhen two escaped and alerted the authorities.

On the outside, the property looked like a single-family house, located in a neighborhood on the outskirts of Onda (Castellón), a municipality of 24,859 inhabitants famous for its orange groves.

The house was split into two parts, in one, 25 people suffered appalling conditions according to police who raided the building.

They occupied three rooms with bunk beds whose beds were shared by two and three people and they depended on a broken refrigerator, where they kept the little food they had and a small rusty stove for cooking.

They shared a filthy toilet made of plywood which was located outside the house and an unhealthy shower fed from water tanks filled with stagnant water.

There were two vans (one is in the picture below) that used to pick up the labourers very early in the morning and drop them back off late at night. The group of orange pickers consisted of very poor illiterate Romanian peasants, smuggled into Spain for the very purpose of exploitation. Most could not read or write and many had never even seen or heard of a credit card!

On the other side of the wall though, where the gang lived, was a spacious well-furnished double room, a bathroom with jacuzzi, a  55-inch television, recliners, and a modern fully equipped kitchen with a full fridge!

In the words of the Guardia Civil:

“No one ever dared to cross the imaginary line that separated those two worlds, that of the exploiters and that of the exploited,” said the agents of the human trafficking section of the Central Operating Unit of the Civil Guard (UCO), who had followed the gang’s movements for months.

“They entered and exited through a back door, never crossing the house, without crossing that corridor, convinced that this was the only place in the world,” they add.

One day “about a year and a half ago,” said the investigators, two brothers 16 and 17 years old, ragged and hungry, managed to run off and stopped a Guardia Civil patrol.

“They were hungry and had nothing to eat, despite having been working for several weeks in the field. They asked for help, ”the agents say.

Thus began the so-called Operation Bravos, which has resulted in the release in the last few months of a total of 61 people, distributed in various populations, and five arrests, including Romanian couple, the ring-leader of the plot, and three family members.

Allegedly, the couple captured, moved and exploited “at least a thousand people in the last four years,” according to agents and the prosecutor for Immigration of Castellón, Carolina Luch.

Pending the trial, those arrested are in pretrial detention for the crime of human trafficking, punishable by between five and eight years in prison for each victim. A possible crime of money laundering is also investigated.

A trial date is yet to be finalised, more to follow on this despicable tale.