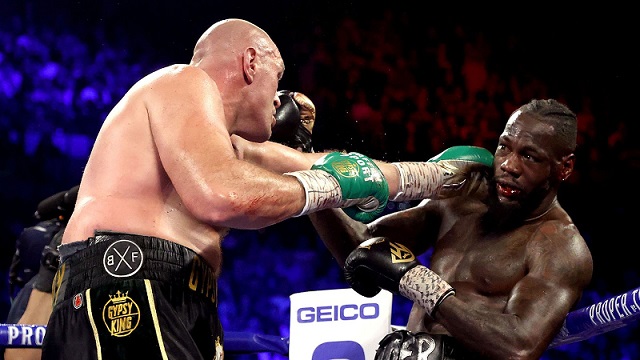 Promoter Bob Arum has revealed that Deontay Wilder has officially exercised his rematch clause to fight Tyson Fury for the third time. The trilogy will take place in July before the Olympics, the Top Rank promoter has confirmed.

Fury (30-0-1, 21 KOs) drew with Wilder in Los Angeles back in December 2018 before taking him apart in their return last month, dropping him twice before the towel was thrown in after 99 seconds of the seventh round at the MGM Grand Garden Arena in Las Vegas.

The American, who didn’t just lose his world title but also his unblemished record in the one-sided demolition produced by Britain’s Fury, had 30 days to call a rematch and Arum says he has been “formally notified” by Wilder’s team that they are doing so.

Wilder, 34, came out with a string of excuses in the wake of his defeat to Fury, the most bizarre of which was his 45-pound ring walk costume, that apparently ‘weakened’ his legs, while there was also talk that Mark Breland –– the man behind the towel-throwing on the night –– would be axed from the team.

Thankfully, though, Wilder saw sense and kept Breland, the man who had only his best interests at heart, on-side and has now promised to get back to winning ways when facing Fury again.

“Your king is here and I’m not going anywhere, for the war has just begun,” said Wilder in a social media post. “I’m a king that will never give up and will fight to the death. I am a warrior, I am strong and I will be back.”

Anthony Joshua’s promoter Eddie Hearn said talks for a heavyweight unification fight between his fighter, who has the WBO, IBO, WBA Super and IBF world heavyweight titles, and Fury were underway.

But with the rematch clause triggered, Joshua is now expected to fight Bulgarian Kubrat Pulev in a mandatory defence of his IBF title on home soil in the summer.

Hearn said that the fight between Joshua and Pulev, the IBF mandatory challenger, will take place on June 20 at the Tottenham Hotspur Stadium in London, exclusively live on Sky Sports Box Office in the UK and DAZN Stateside.

July 18 is the date that has been mentioned regarding the trilogy between Fury and Wilder, but further details will be revealed in due course.