Boy 10, crushed to death by Topshop barrier in front of Mum 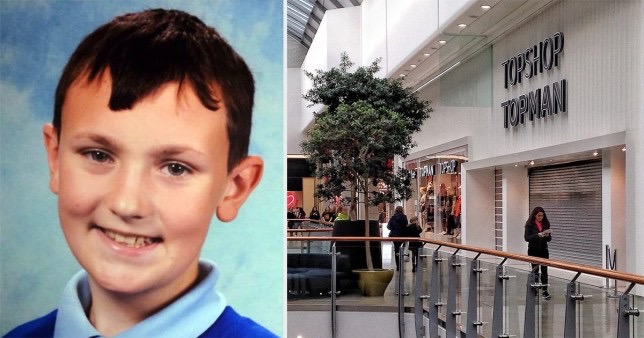 A 10-year-old boy killed in a freak accident in front of his family was swinging on a queue barrier in a Topshop which fell on his head, an inquest has heard.

Staff at the Oracle shopping centre in Reading tried to save Kaden Reddick before paramedics arrived, but he died later in hospital.

The tragedy happened in February 2017 and is now the subject of an inquest focusing on the barrier’s design and maintenance, which will also look at separate incidents involving similar barriers elsewhere. Kaden’s mum, Lisa Mallet, and grandmother Deborah Mallet told the inquest jury how they had taken Kaden and his siblings to the cinema before going shopping in the Oracle.

Lisa told jurors how Kaden and his sister were bickering about sweets, moments before she heard a ‘smack’ and saw her son ‘on the floor with the barrier on top of him’.

The barrier was described as a 1m tall by 2m wide ceramic unit, weighing up to 180kg with sale items propped on top. Lisa said the one that killed Kaden had holes in its top containing sweets.

A student who witnessed the accident at around 4pm, Niamh Gillespie, told jurors that Kaden had grabbed the object with his hands and started swinging, causing it to fall when he lifted his feet off the ground on the second swing.

Zanthe Johnson, who was working one of the tills, added: ‘From where I was standing, I saw the barrier hit him in the face, I could see he had a shocked look, but as soon as he hit the floor he was still.’

The Oracle’s duty manager, Matthew Clark, and his colleagues attempted CPR before paramedics arrived and rushed Kaden to the Royal Berkshire Hospital. The boy was declared dead at 5.18pm.

After the incident, a health and safety officer at Arcadia, the company chaired by Sir Philip Green which owns Topshop, told police of a similar incident a week earlier in a Topshop store in Glasgow.

Detective Sergeant Alice Ashman was shown CCTV footage of a 10-year-old girl being ‘struck by a falling queue barrier’.

The officer told jurors: ‘Arcadia told us that queue barriers were removed from all stores and were going to be stored in Kent and Leeds.’

She also recounted footage of the same barrier which killed Kaden moving backwards when two people at the store leaned their weight on it.

The Crown Prosecution Service (CPS) decided last year not to bring criminal charges against Topshop’s parent company because there was no realistic prospect of conviction.

They admitted to a breach of health and safety laws and were fined £450,000.