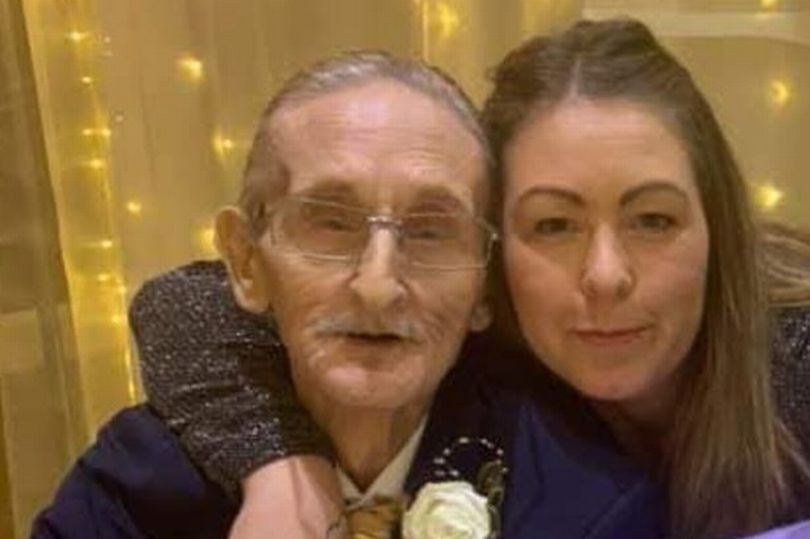 83-year-old Fred Pruden had recently lost his wife Rachel – known as Babs – to lung cancer and had attended her funeral the day before, at St Gabriel Church in Huyton.

Hayley Dickson, 32, said her grandad who was struggling to come to terms with the death of his wife of 60 years, had lowered his head towards the table and started crying in the pub when a manager came over to them.

Hayley claims the manager accused Fred of being drunk and falling asleep on the table and asked them to leave.

However, a spokesperson from the pub chain said it “fully backed” the actions of staff and said the group was asked to leave “due to a genuine belief that they were intoxicated” and one of them then became “abusive towards staff.”

The family denies the claims and says they “can’t believe anyone could treat an 83-year-old man like that.”

Hayley said”My Nan passed away two weeks ago and the funeral was on Monday.

“The next day my grandad was really upset so we decided to take him out for a meal and a drink.

“They were married for 60 years and had known each other for 70 years.

“He’d had something to eat in the pub and he hadn’t even touched his second glass of wine when he put his head down and started crying.

“A manager came up to us and she said he was drunk and asleep.

“She said, ‘It’s company policy to ask someone to leave when they are drunk and asleep’.”

“But she just kept repeating the same thing – that it’s company policy to ask someone who is drunk and asleep to leave.”

Despite asking to speak to another manager to explain the situation to them, Hayley said she was told that no one was available and she was eventually given an email address to send a complaint to. Hayley said: “I went back to the bar and asked for a drink for myself and the supervisor said he wasn’t serving me because ‘your group got told to leave before.’

“I said let me tell you what happened and he told me not to tell him what to do which I wasn’t, I was livid.”

Hayley said her grandad was left feeling embarrassed by what happened and still had his head down as they left the restaurant. She said: “We all got up to leave and the staff stood watching as my grandad walked out with his head down. He was so embarrassed.

“I had been polite and didn’t get angry but when we were leaving I did shout that my nan had lung cancer and had just passed away so that everyone in the pub could hear.

“I wanted everyone to know how they’d treated us and that we hadn’t done anything wrong. I think it’s disgusting that they could treat an 83-year-old man like that.”

A Wetherspoon spokesman, said: “A number of customers had been in the pub for several hours and were falling asleep on the table.

“Staff asked customers to leave due to a genuine belief that they were intoxicated.

“They said they were mourning a relative who had recently passed away and that they had only had a few drinks. Then one of the group started to be abusive towards staff and intimidate them. We will not tolerate this behaviour in our pubs.

“We fully back the actions of our staff.”