EXCLUSIVE: “Stop fake news”: What it’s really like in Venice amid Coronavirus fears 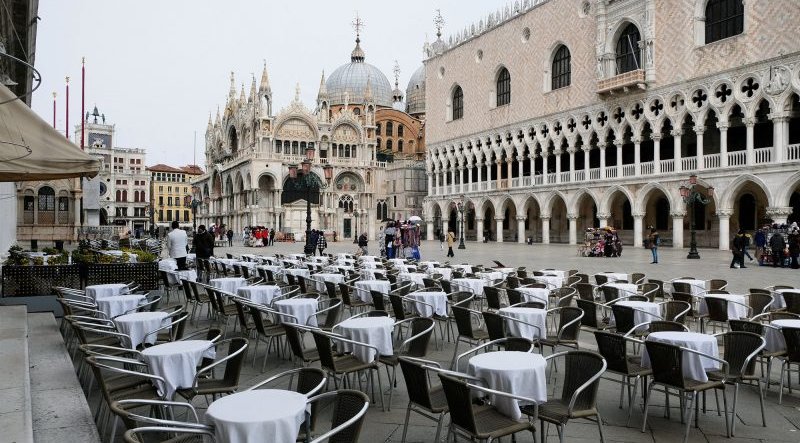 From the 4th May, Italy is expected to relax lockdown rules on a regional basis.

The streets may not be thronged with tourists, but locals want visitors to know that the city is far from being in lockdown.

With Italy making headlines as the worst hit country by Coronavirus outside of Asia, its usual influx of tourists has plummeted. The northern Italian city of Venice has been particularly badly affected, as it relies almost exclusively on tourism for its income. Local business owners in the city have begun voicing anger at what they consider over-dramatised news reports, which they are holding partly responsible for the plunging visitor numbers. Now they want the world to see that the city is running as normal and is safe to visit.

Raffaele Alajmo, CEO of the Alajmo restaurant group, is sitting outside one of the group’s restaurants, Gran Caffè Quadri, in St Mark’s Square. “Look,” he says, gesturing at the sunny piazza, “it’s marvellous.” The usually beleaguered square is blissfully calm, but certainly not devoid of people. Along with other bar and restaurant owners, Alajmo is unhappy at the way the arrival of the Coronavirus in Venice has been covered by the press. “This virus has been blown out of proportion by the media,” he comments, “and we have to send out a message that is completely different.”

The northern region of the Veneto currently has fewer cases of Coronavirus detected than neighbouring regions Lombardy and Emilia-Romagna, and it has only one town in lockdown compared to 10 in Lombardy. Despite this, the region’s capital, Venice, has borne the brunt of Coronavirus fears in the international media. After Venice Carnival was cut short, the city began to be branded a ‘ghost town’ by the press, and images of desolate streets circulated the web.

Compounded by cancelled flights to the area and official advice by other nations to ‘avoid all unnecessary travel’ to northern Italy, many tourists are unclear whether it is even still possible to enter the city. Alajmo states categorically, “You can absolutely visit, public transport has never stopped, and nearly all museums are open.”

Users of Facebook groups dedicated to the city of Venice are now sharing their own photos to contradict those released in the press. Marco Genovese, a resident of the city who posted photos of tourists milling around central attractions, says, “I understand selecting certain angles to make an effect, or waiting for evening or early morning to exaggerate the situation, but Venice isn’t empty.” He notes that, in fact, the number of tourists visiting the city at the moment might not have been a problem 10 years ago, but now that so many of the businesses in the city depend on tourism for their livelihood, “the city needs a constant overdose of crowds.”

Federico Spolaore, owner of La Forcola Hotel in Venice, comments that, “there is no panic, it’s not true what journalists have been writing.” He attributes a lot of their cancelled bookings to fear mongering press, saying, “there are many fewer tourists because they are terrorised by this news reporting against us.”

Not only are Venetians urging tourists not to cancel their bookings, but they now are actively encouraging visitors to cash in on the experience of seeing the ‘real’ side of Venice. As Alajmo comments, “this is a great opportunity to visit Venice in a relaxed way, without the queues of tourists.” He also tells of an encouraging encounter with a Mexican tourist, who seized the opportunity of cheap flights to have a once in a lifetime trip to the city. “He said he could never have afforded it otherwise,” says Alajmo, “He made a very good choice.”

Spolaore agrees that those tourists who are choosing to postpone their trips are making a big mistake. “Venice is so beautiful like this,” he enthuses, “you can really enjoy it with fewer people.” In addition, he notes that, “we have been lucky with the weather this year, it’s very mild, and we also have snow in the mountains now so tourists can enjoy everything.”

Initiatives are being taken to demonstrate that Venice is still open for business and wants to encourage visitors back. Maurizio Salvalaio, president of the Casinò of Venice, reopened the historic establishment on Friday after a week closed to visitors. He comments that, “Venice is extremely resilient, it is certainly able to overcome this difficult moment.”

Salvalaio explains that before reopening the Casinò, cleaning and sterilising procedures were undertaken in line with the new sanitary regulations. “It was a lot of work, and it is ongoing,” he says, “but we are here to welcome everyone as normal.” In fact, as Salvalaio remarks, “Venice has always been a city open to the world.”

Back in St Mark’s Square, the historic bars, including Alajmo’s Gran Caffè Quadri, have announced that with every aperitif drunk in their bars, they will offer a second on the house. While these actions have been taken quickly, Spolaore notes that it’s difficult to make plans with the situation evolving so quickly. “We’re living day by day,” he says.

In the meantime, residents of the city are making the most of the peace and quiet. Roberta Munarin runs her family restaurant, Trattoria Pontini, along with her siblings. “Last night we had all Venetian diners,” she reports, “and they told us how happy they were to finally be able to get a table in our restaurant!”

After talking to residents, it’s clear that anger at the media has far eclipsed fear of the virus.  As one promotional video by photographer Marco Contessa states, “Venice only ‘infects’ with its beauty.”

Rebecca Ann Hughes is a freelance journalist based in Venice and researching the impact of overtourism in the city. She is the author behind the blog La Brutta Figura, and she also has also written for the Local, Prospect Magazine, and International Times. Follow her on Twitter.