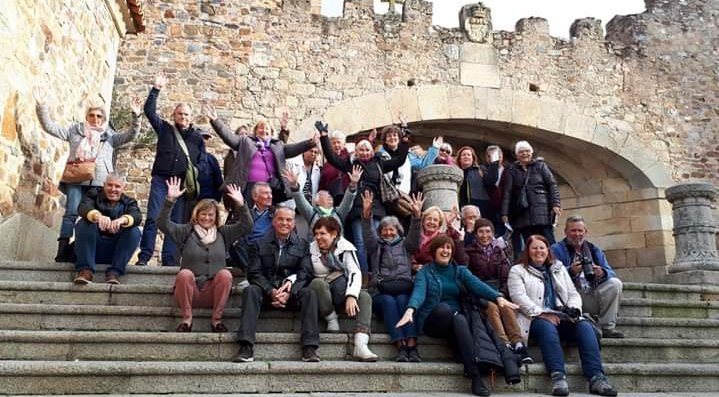 RECENTLY both Lux Mundi Fuengirola and Torre del Mar had a four-day excursion to Extremadura, a western Spanish region bordering Portugal. On the first day, the group of friends travelled by coach from the Costa del Sol through the beautiful countryside to the city of Caseres.  In Caseres, which was founded by the ancient Romans, the group first visited the Gothic, 15th century Santa Maria Cathedral with its unusual carved cedar altar, followed by the tourist office with its walled patio garden.

The second morning the group continued to the mountain village of Guadalupe, in the region of Las Villueres, a World Heritage Site famous for the Royal Monastery of Our Lady Santa Maria of Guadalupe. They then drove to the town of Trujillo to take in the spectacular Moorish palace, built-in 1232 to defend the town against the Spanish.

The third day saw a visit to Merida to see the beautifully preserved Roman theatre, where they still hold concerts during the summer. This was followed by a trip to the Lázaro aqueduct and Roman bridge across the Rio Guadiana.

The last day after breakfast they joined the coach for the homeward journey travelling in the direction of Merida and then toward Cordoba to visit La Ermita, Virgen de Ara (The Sistine Chapel of Extremadura).

All agreed it had been a wonderful excursion, full of interest, having visited some unusual and beautiful places. Lux Mundi would like to thank all who supported this excursion, which enables them to continue with their charitable work.