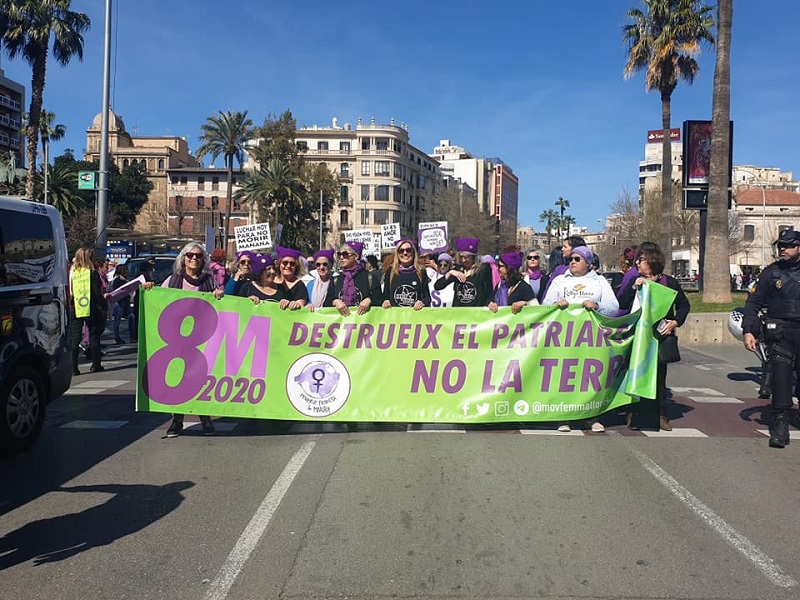 SLOGAN: Marchers made their way through the streets of Palma under the banner ‘Destroy the Patriarchy, not the planet’ CREDIT: Moviment Feminista de Mallorca Facebook @MovFemMallorca

MALLORCA took a firm stand to mark International Women’s Day.
All over the island there were events and actions leading up to and on the actual day itself on Sunday March 8 to celebrate women and their contribution to society, but also to call for greater rights and gender equality.
The biggest gathering was the march organised by the Mallorca Feminist Movement under the banner ‘Destruye el Patriarcado, no el planeta’ (Destroy the Patriarchy, not the planet).
Some 10,000 women, and men, of all ages turned out to make their way in a festive atmosphere from the Plaza España to the Parc del Mar, where this year’s manifesto was read out.


Joining the demonstrators were representatives of a number of political parties, trade unions, social organisations and institutions, including the Government Sub-delegate Aina Calvo, the Consell de Mallorca President Catalina Cladera and Palma city Mayor Jose Hila.
Balearic Island President Francina Armengol was also there. She insisted on the need to “carry on fighting, to continue demanding and to continue celebrating” the advances gain in gender equality.
“We have come a very long way with important laws… but there remains a long road ahead; we still have a situation of real inequality”, Armengol added.
Poignantly, one group of feminists marched wearing T-shirts bearing the message ‘Absent, but present’, and taped off a space in memory of women who have lost their lives at the hands of their partners or former partners.
Mallorca Feminist Movement spokesperson Sandra Sella identified protesting against gender-based violence, calling for ‘ecofeminism’ as an alternative to “the neo-liberal and capitalist system”, and putting pressure on political and social collectives not to undo the rights women have gained as among the main objectives of the march.
The movement had also called for women to support a 24-hour work, consumption and care strike to advance “co-responsibility” for caring for children and the elderly.