Red Cross donates ambulance for 'little ones' to Denia Hospital 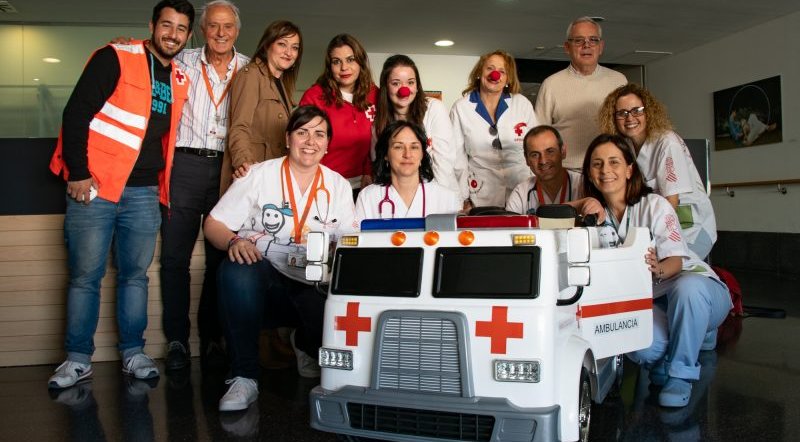 THE Red Cross (Cruz Roja) has donated a small remote control, electric ambulance to Denia Hospital, to transport little ones on their journeys within the health centre.
The initiative, led by the Red Cross Youth, is a new scheme within the care and respite projects being developed at the hospital, with the aim of improving the well-being of the children admitted and their families.
The donation ceremony was attended by the Director of Nursing of the Denia Health Department -DSD -, Alfredo Moreno, accompanied by the Head of Service and the Supervisor of Pediatric Hospitalisation, Josep Mut and Amparo Exojo.
Also present was the President of Denia Red Cross, Eduardo de la Morena, the President of the Provincial Health Commission, Ana Belén Quintanar and the Technical Director, Zahira Galindo, who were accompanied by a group of volunteers from the project.
The donation is part of a provincial action that is being developed in several public hospitals in Alicante. In total, the Red Cross will deliver eight small solidarity ambulances in several hospitals, which have been bought through donations.
Red Cross Youth has been active in hospitals since 1992. During the last five years alone, the Hospitalised Childhood project has benefited more than 15,000 children in the province of Alicante. Of these, more than 3,700 children were treated last year; 203 in the Hospital of Denia.
It is worth mentioning that during the same year the institution started to develop different types of activities for non-hospitalised children, in outpatients. In addition to animation and games, the Red Cross’ activities focus on accompanying children when their families are unable to do so or need to leave the hospital for some time.