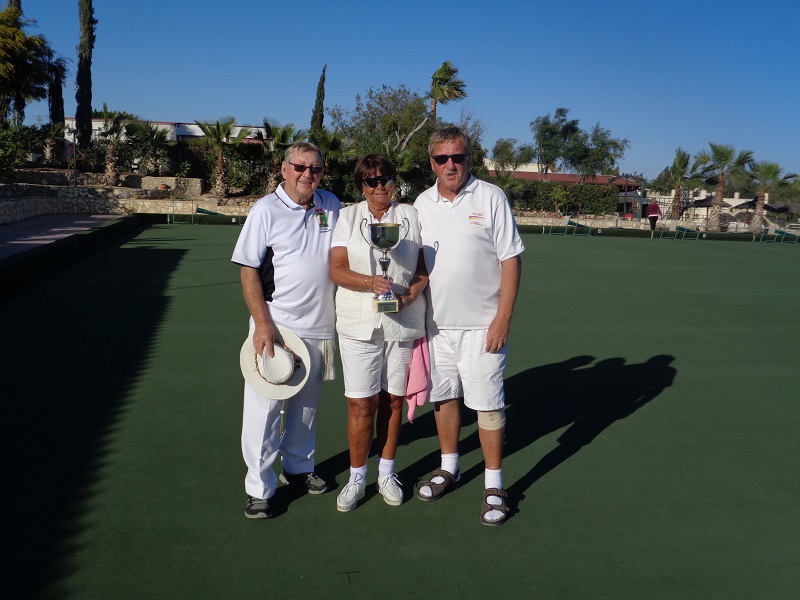 IT proved to be a highly entertaining final to the Almeria Bowling Club 2020 Spring Handicap Drawn Triples tournament.
What was the seventh year of the competition got underway on January 6 and was played on Monday afternoons. This is a drawn triple, where the total handicaps of the drawn teams are averaged, and the difference starts the game at that level.
During that period of eight planned dates, the six best individual total scores were totted up. These were then drawn into two triples to play in the final on staged earlier this month during a very windy afternoon.
The six successful members who got to the final were Brian Thompson, Linda Band and John Fitzgerald drawn to play Sylvia Pritchard, David Walters, Shelagh Allen.
Sylvia’s team got off to a great start, but John’s team crept up on every single end, and on the 10th end the score was 11-13. Brian’s team then went briefly ahead on the 11th end.
Sylvia’s team pressurised Brian and team, scoring five shots on just one end. By the 17th end the score was level at 19-19. But Brian’s team scored one shot on the last end, winning the competition on the 18th end.
Almeria Bowling Club Ladies captain Carol Hollett thanked the members for their support, Bryan Hughes for the care of the green and equipment and Tony Lear for running the competition and taking the photos before presenting the trophy to the deserving winners.