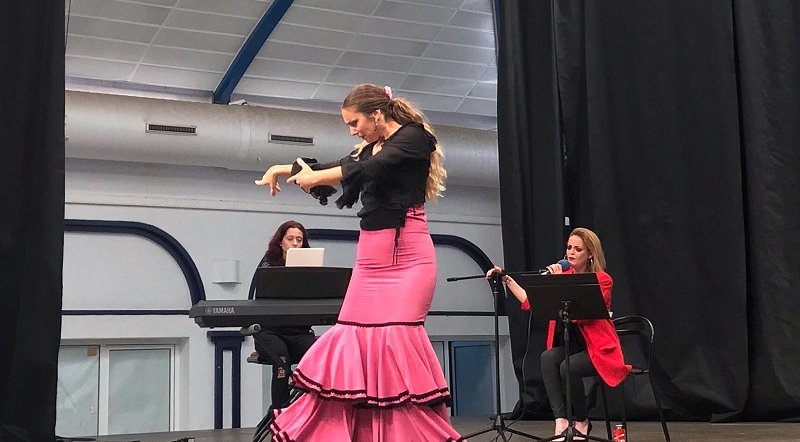 ENTERTAINING: The role of women in flamenco was explained through music, song and dance. CREDIT: Ayuntamiento de Mojacar

PUPILS at Mojacar’s Rey Alabez secondary school were treated to an entertaining and educational initiative focusing on women in the world of flamenco.
The educational ‘Women in Flamenco’ session staged in the multi-uses centre was just one of the activities held in the municipality this month to mark International Women’s Day.
The range of performances relived the role of women and their part in the evolution of flamenco, explained through music, song and dance. The story highlighted artists such as Lola Flores, La Niña de los Peines, one of the first leading female figures to make history in the flamenco world with her own company and individual style of singing, and Niña Pastori, a leading light in music and the folkloric copla style of singing.
All are seen as an example of the evolution of flamenco and of the role of women in Spanish traditional music.
It is believed that flamenco, which is so closely associated with Spain and with celebrations, began in the home, where women have historically been the key figures. It was very common for them to start dancing or singing at impromptu gatherings.
Since that time, women and flamenco have gone hand in hand, making history with their singing and dancing and bringing fame to those with outstanding talent.
The schoolkids learned about the different flamenco musical structures on the day, directed by singer, Rocio Zamora and dancer Mayte Beltran, with the school music teacher and session organiser Esther Peñas accompanying on piano.
Last year, the fourth year students were given a similar experience, which was so popular that it was decided to repeat the exercise for the whole school, which also turned out to be a huge success.