CORONAVIRUS: The Catalan Government asks everyone to self-isolate and demands more extreme action from the Spanish Government 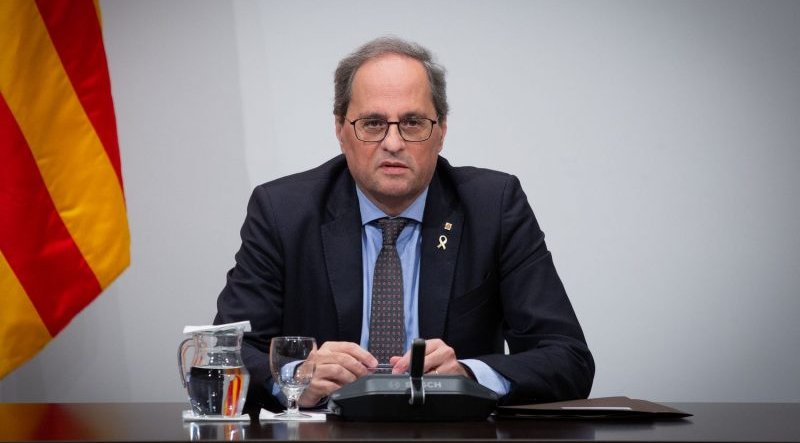 Catalan premier, Quim Torra, has called on the central government in Madrid for more assistance

The Catalan government has asked everyone to self-isolate and demanded more extreme action be taken by the Spanish Government.

The Catalan regional government does not have the powers to close borders and major infrastructure, such as airports and train stations.

The administration in the northeastern Spanish region can, however, close down bars, restaurants, cinemas, ski resorts and shopping malls, apart from those selling foodstuffs. Those steps were taken via a resolution that was made public on Friday night.

As in other parts of Spain that are struggling to contain the spread of what has now been classed as a global pandemic, the Catalan government has also restricted the celebration of funerals, as well as visits to or residents in senior care homes.

The resolution passed in Catalonia also closed “theme parks or any other center that is dedicated to leisure activities.” All of these measures went into force at midnight Friday night.

“The progress of the infections requires us to act more drastically,” stated the Catalan premier. “We believe that we have to anticipate a very fast evolution of the disease in our country and that is why we believe we have to lock down the whole of Catalonia. This is about restricting entries and exits in the whole country. We believe that a step forward is needed.” Torra, who is a hardline supporter of Catalan independence, was making a gesture toward the supporters of secession with his statement.

Torra called for the assistance of the central government to “limit access points” in the infrastructure that is not under the control of the Catalan government, such as the borders with France, ports, airports and rail links.

Torra said in his address that he had turned to the Spanish prime minister, Pedro Sánchez, for authorization to make these closures at Catalans major transport hubs. “We have not yet received a response,” he said, calling on the Socialist Party (PSOE) politician to make an effort to isolate Catalonia.