Bewilderment in the Airport, Coronavirus in Costa Del Sol’s Malaga: “This is worse than in August” 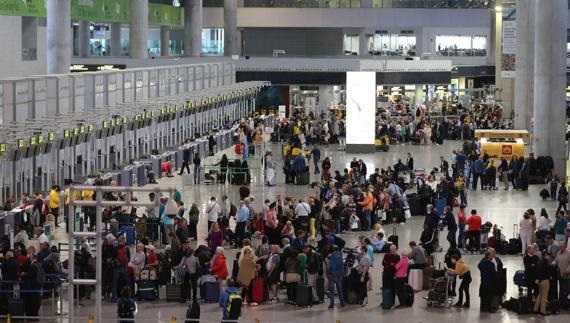 No security distances and no face masks between travellers and staff members. Immense queues at boarding gates and luggage drop-offs.

“Given the exceptional circumstance, keep a security distance of one metre between people” is what you hear overplaying on the tannoy every 15 minutes in Malaga airport, but the effect is null as the message resonates with no one. This Monday, March 16, at 8:00am , only 30 hours since the government issued a state of alarm and Malaga airport is still bustling with people.

Between the hustle and bustle, there is no conceivable way of maintaining the safety distance of a metre but there don’t seem to be many other forms of precaution against the virus: few use facemasks or gloves. Those who quickly try to leave the country are hasty, but those who are working there are bewildered.

The workers at the airport can only compare the situation to the months of summer, and especially august, when the airport is at its fullest capacity. A worker commented that “here, we are living in a parallel world. We look and there are no protocols, no gloves, no facemasks”.

They few travellers passing by criticise that inside bars are still open, “they are offering coffees and sandwiches. What sense does this make when outside all businesses are closed. It is the epitome of hypocrisy. I don’t know if it’s because it’s not as dangerous as people make out or it’s just that these people do not care”.

Meanwhile the workers rejoice in the fact that the press are at the airport, “you must let people know what is going on here” exclaimed a worker. Four air hostesses confirmed that they have to be in constant contact with the passengers but with no measures of security. “They have not given us gloves or masks. We have to be 30cm away from them and we have extended flight times so that all these people can leave Spain” they argue. “Typically in these dates, one plane will carry 30 passengers, now they are full and sometimes they even leave some passengers on the ground. They will end up taking the virus with them to all areas” they reiterate.