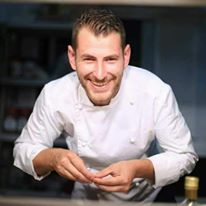 With wine sales in Italy and Spain being reported by the media as having increased by 23% during the lockdown, Chef Joffrey is making pasta carbonara tonight matched with a fruity, red wine from Ribero Del Duero region.

This red is extremely popular on the Costa Del Sol and around Spain due to its complex and flavourful taste.  Ribero Del Duero is made in the Castille Y Leon region of Northern Spain.  Many prefer a white with this dish such as Pinot Grigio, I am only giving my preference.  The recipe has a glass of white wine already in it so keeping your budget in mind, you should choose white rather than red.

Pasta Carbonara is an easy recipe that you can make on a budget on lockdown but be careful not to overcook the pasta, which I have done many times when Chef Joffrey isn’t chez-nous.  Here is Chef Joffrey’s recipe.

To make spaghetti carbonara, you will need:

– pancetta or thick bacon – normal bacon is ok under lockdown

1. Get a pot of water boiling.

3. Add the cubes to a non-stick skillet with some olive oil and the garlic cloves. Turn on the heat (about medium-low, not too hot) and wait for the sizzle, as it sizzles shake the pan around and cook until the garlic is golden brown and then remove the garlic–or, if the bacon finishes at the same time as the garlic you can keep the garlic in there. Keep cooking the bacon/pancetta until it’s crispy and it’s released lots of its fat. When you taste a cube and it’s delicious, add a glass of white wine.

4. Is your water boiling? Add lots of salt and then add the box of spaghetti. Stir it around a bit so it doesn’t stick.

5. Now, in a big bowl crack two eggs. Grate in a TON of Parmesan cheese–at least one cup. Grind black pepper over it all and then stir it together with a fork.

6. Your preparations are done.

7. After six or seven minutes of boiling, taste a strand of spaghetti. Joffrey uses tongs to remove a strand of spaghetti, take it to the sink, run cold water over it and then taste. You want to feel the bite but you don’t want it to be raw. Keep tasting and checking and you will know when the spaghetti is ready to add it to the bowl with the eggs and cheese and black pepper.

10. Finally, chop some parsley and add lots of parsley to the bowl and stir one last time. Now grate more cheese on top, grind some pepper, and you are done.

I will post a picture of Chef Joffrey’s creation if I catch him in time.  Enjoy your food under lockdown and make a batch to freeze and use next week for budgetary purposes.