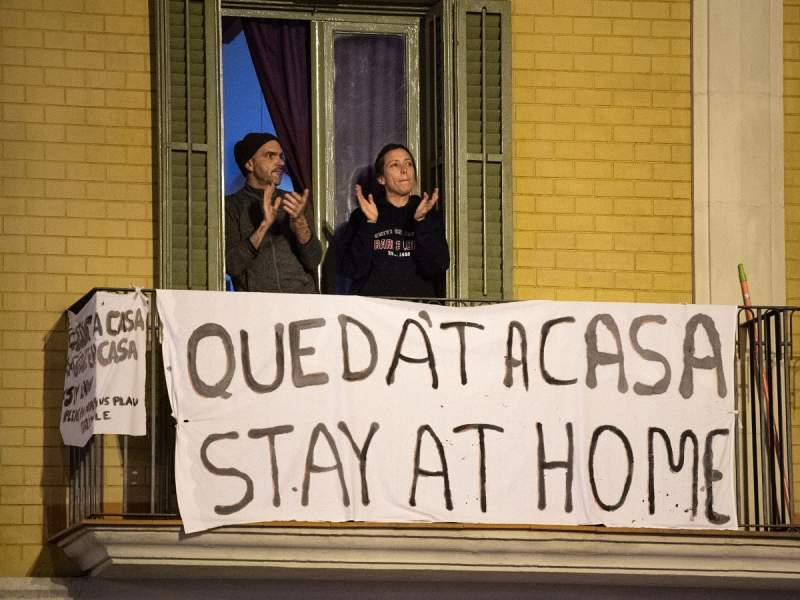 Nobody would have imagined being basically locked up 24 hours a day in their own homes when the bells struck on New Year’s Eve, but just three months later everyone in Spain unless in employment for necessary work finds themselves behind closed doors.

Firstly we face timed Andy Waddell a regular reader originally from Bideford in North Devon who has lived in Los Boliches  for over 12 years now and as he answered his tablet he and his wife Angie were throwing darts at a dart board stuck to the fridge, Andy told us: “I’ve always been poor at darts, but at least I can beat the wife, we have a morning, afternoon and evening competition every day in between a few TV programmes, the score currently is 33 – 6, she is hopeless but it occupies the time, I did stick a map of the world on the dart board and told her hit a country and when this is all over I will take her there for two weeks when we can get out, unfortunately it looks like we are going behind the fridge,” he laughed.

Residents along the sea front in Fuengirola meanwhile have set up a sunbathing competition on their balconies that see’s a group of 10 battling it out under limited sun rays, we spoke to organiser Jason Thorne who told us: “well it all started from a laugh on Facebook, chatting to pals who also live on the front, we were laughing how bad the weather’s been since lockdown which has been more like Blackpool weather, so Tommy said let’s have a sunbathing competition then and so we have, it’s quite funny as soon as a glimmer of sun comes out, there’s a dash to the balconies and the loungers, Tommy can’t strip quick enough!”

Two other contestants Maggie Wilson and Sarah Proctor have gone even further, they have taken two boxes of corn flakes as apartment/balcony neighbours and are having a count out to see who’s got the most in a box, currently both are in the 500 region as they continue to count.

Jimmy O’Brien has taken to cooking and sharing his cooking exploits live on Facebook and has built up over a 1,000 followers already to his cooking lessons, or should we say his cooking disasters, but he appears to be giving everyone a laugh with his un-mouth-watering dishes.

Jenny Thomas though in Torreblanca is simply sticking with the puzzles in the Euro Weekly News, she said: “I have loads of back editions saved up from the last few weeks and have never got round to the puzzles and crosswords etc which I meant to do ages ago.The paper’s still coming out too, so it’s keeping me occupied in between a little knitting for my great grandchild.”

What are you doing to pacify the time? Let us know!