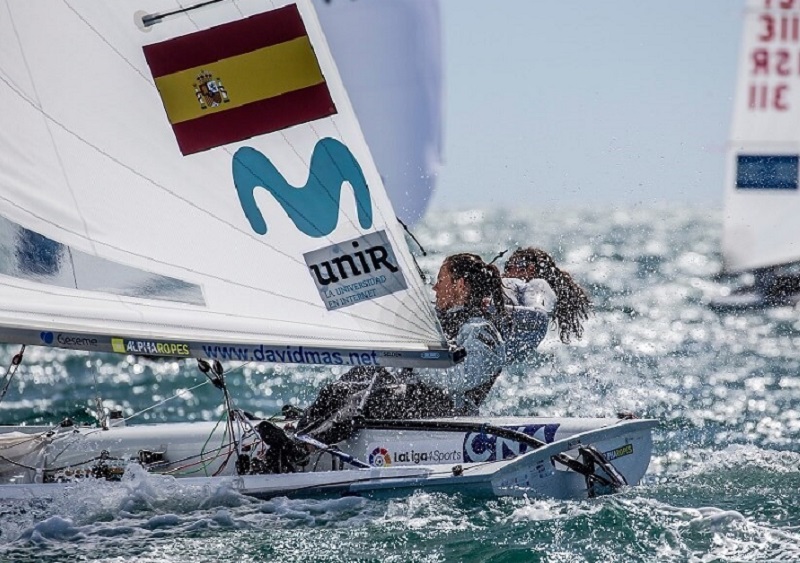 RIGHT DECISION: “This is not the time to think about us and about sport, but about the lives of everyone”, commented Silvia Mas, pictured here in action with teammate Patricia Cantero. CREDIT: RFEV

OLYMPIC hopefuls from Mallorca are resigned to the postponement of this summer’s 2020 games in Tokyo in the face of the coronavirus crisis.
Two of the Arenal sailing club yachtswomen who had hoped to make it onto the Spanish Olympic team, Paula Barcelo and Silvia Mas, agreed the decision was the right one.
“It’s a tough decision for sportspeople because when you start a campaign you plan it, in this case, on the basis of the Olympic Games, with the highest performance. But it seems selfish that people are thinking about their lives and us about medals just in the field of sport,” Paula commented.
“I believe we all have to be responsible in this situation,” she added.
Both Paula and Silvia are now under confinement at the Santander High Performance Centre, and of course are unable to get out onto the sea due to the State of Alarm restrictions, but will, Paula stressed, “continue working as we have been up to now.”


Silvia echoed Paula’s sentiments, remarking, “although it hurts after all the preparation in recent years, with schedules and travelling, and everything we have given up, it is the correct and responsible decision.
“This is not the time to think about us and about sport, but about the lives of everyone, especially those who are suffering”, she added.
“We have no other choice but to remain confined and make the most of this time to continue training in the gym, to continue with the chats about meteorology, chats abut tactics, chats about regulations.
“We have not stopped since the State of Alarm decree; we are carrying on with a packed agenda, adapting to the circumstances.”
Both Silvia and Paula now have their sights set on taking part in the games when they take place in 2021.
“We have another year to continue working hard, a year to get to the Olympic Games, getting better and are making the most of this slump which this situation could cause for other crews,” said Silvia.
Arenal sailing club director general Ferran Muniesa also supports the International Olympic Committee’s decision.
“We understand that given the current global level situation due to Covid-19 not all sportspeople going to the Olympics could do so in equal conditions. We understand the decision to postpone them, despite the disruption to sportspeople’s preparation.
He continued, “Although we are really looking forward to seeing the first Arenal sailing club sportspeople in the Olympic Games we will have to wait a little longer, although we are convinced everything will turn out alright, and the main thing is to stop the pandemic and that we are all alright.”