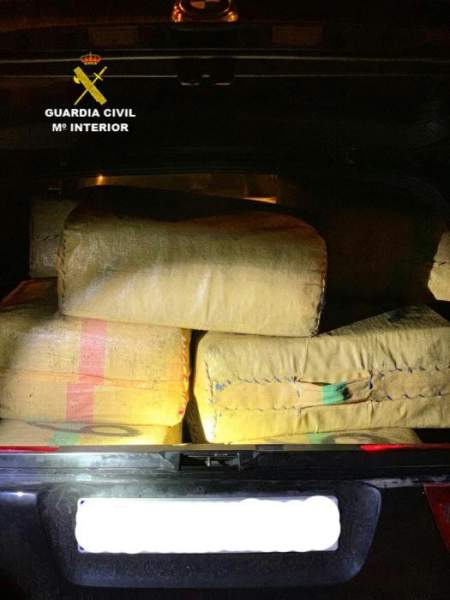 THE Guardia Civil has intercepted 5,626 kilos of hashish and arrested 58 people in under two weeks, from Malaga, Huelva, Sevilla, Cadiz, Algeciras, and Almeria.

Almost 60 people have been arrested all around Andalucia as a result of 28 different operations carried out by the Guardia as part of the larger Carteia Operation. This operation fights drug trafficking in the Campo de Gibraltar area as well as its surrounding influences.

According to the Armed Institute, the State of Alarm decreed by the government as a result of the coronavirus pandemic has negatively influenced the capacity for movement between criminal organisations, although this has not impacted activity between the Andalucian and Moroccan coasts.

Researchers warn that “Drug traffickers take advantage of any circumstance, such as the current situation in Spain with the Covid-19. After the initial impact this caused, criminal organisations try to adapt to the new needs and vulnerabilities of society, seeking illicit benefit. The operations carried out in Malaga, Huelva, Sevilla, Cadiz, Algeciras and Almeria have allowed police forces to intercept 5,626 kilos of hashish.

On March 16, in Malaga, officers located a bale of hashish and intervened a narco-boat equipped with three outboard motors after detecting a stash in the Puerto de la Duquesa, in Manilva. Eight days later, the Operational Service Centre spotted a semi-rigid boat which was heading to the coast on the border between Malaga and Cadiz. When the Guardia Civil arrived to Sabinillas, Manilva, three bales of hashish were intercepted, weighing 105 kilos.

On March 30, off the coast of Huelva, police intercepted a high-speed boat and arrested the two occupants. With the help of the Isla Cristina Local Police it was possible to arrest 12 more people who were hiding with 114 jugs of fuel prepared to supply the narco-boat.On March 20, in the Jara area (Sanlúcar de Barrameda), two people were arrested and 1,050 kilos of hashish were intercepted and a lorry containing three 350 hp outboard motors.

In the province of Sevilla, two high-speed semi-rigid boats dedicated to drug trafficking have also been seized during this period. As a consequence of this, one person was arrested.

On March 16, Almería Commando officers arrested three people and located 77 bales of hashish (2,310 kilos) during a stash on Conda beach (Adra) in which they also intercepted a van with 125 bottles of gasoline. That same day, on the beach of Guardias Viejas (El Ejido), a large trailer was found stuck on the shore. The trailer is suspected to have been used to transport and launch high-speed boats into the water.